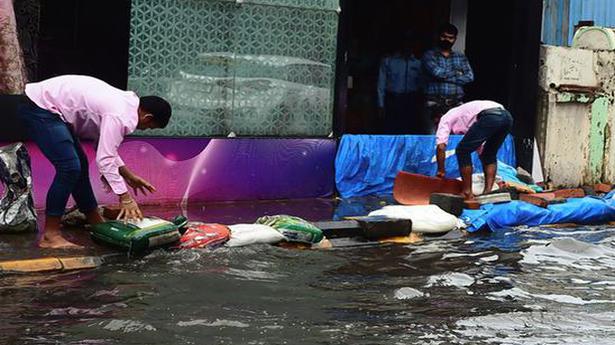 
A total of 99 streets spread over 39 areas in the city were flooded on Friday because of local civic issues and release of water from reservoirs on the outskirts of the city.

More areas are likely to be flooded on Saturday as there have been reports of huge inflow from Andhra Pradesh.

The Greater Chennai Corporation brought down the number of flooded areas from 779 to 39 on Friday, deploying additional manpower, digging temporary drains and pumping water.

Of the 837 motor pumps hired by the Corporation, 341 were operated on Friday. Work on 2,300 complaints were taken up in various parts of the city on Friday. More than 25,000 complaints have been redressed. As many as 645 people have been accommodated in flood shelters.

Meanwhile, the Corporation on Friday issued a flood alert in parts of north Chennai owing to the release of water from Poondi reservoir.

Corporation Commissioner Gagandeep Singh Bedi visited the banks of the Kosasthalaiyar to assess the situation and inspected the relief centres set up in various parts of the river basin.

Officials made an announcement about the release of water from Poondi reservoir in various low-lying areas in north Chennai.

About 30,000 cusecs of water was released from Poondi reservoir on Friday because of huge inflow from Andhra Pradesh.

“More than 45,000 cusecs is expected to be released on Friday night. So, residents along the Kosasthalaiyar have to be prepared for the rise in water level. Residents in low-lying areas will be taken to relief shelters,” said an official.

On Friday, flooding was reported in many areas such as Manali New Town.

Corporation officials visited the localities to carry out relief and rescue work.

“We have shifted residents belonging to the Irula tribe to relief shelters. They were living along the banks of the Kosasthalaiyar. We have given them food,” said Mr. Bedi.

Water was pumped out from parts of West Mambalam and T. Nagar on Friday.