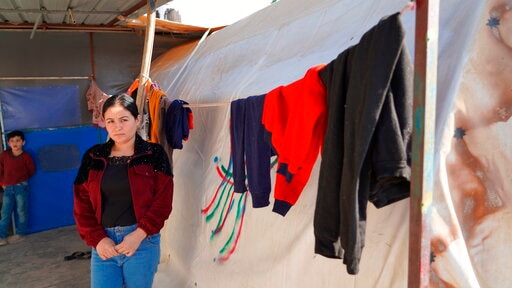 
DOHUK, Iraq: Khari Hasan Kalo peered out of the window of the repatriation flight as it touched down in northern Iraq. It’s a place he and his family had hoped never to see again after they left for Belarus two months ago, driven by dreams of a new life in Europe.

Kalo, 35, had begged for loans and spent his savings on the ill-fated journey to the Belarusian capital of Minsk, the first stop on a journey to the West.

His wife, 30-year-old Zena, had sold her few belongings on the gamble that left the family of six stranded for days in a cold forest on the border of Belarus and Poland. In the end, they returned home, fearing they were endangering the life of Kalos ailing 80-year-old mother.

Yet they say they would do it all again to escape their hopeless life, spent in a camp for displaced persons for the past seven years. The Kalos are Yazidis, a religious minority that was brutalized by Islamic State militants when they overran northern Iraq in 2014.

At the time, IS extremists rampaged through the Yazidi town of Sinjar and surrounding villages and destroyed religious sites. They kidnapped and enslaved thousands of women and children. Years after their lives were torn apart, Yazidis are still unable to return home or locate hundreds of women and children who had been snatched by the extremists. The Kalos’ home lies in ruins.

If it wasnt for my children and my mother, I would never have returned, I would have stayed in that forest at all costs rather than return to this tent, Kalo said Friday, speaking to The Associated Press from the Karbato camp in Dohuk province in the autonomous Iraqi Kurdish region of Iraq. His mother, looking frail, slept throughout the interview.

The Kalos, including three children ages 5, 7, and 9, had returned from Belarus a day earlier.

Its not even our tent; its his sisters, his wife interjected. Its no place to raise children, have a life.

The region is considered the most stable part of conflict-scarred Iraq, yet Iraqi Kurds made up a large group among thousands of migrants from the Middle East who had flown to Belarus since the summer. Even in Iraq’s more prosperous north, growing unemployment and corruption is fueling migration, and the Yazidi community has endured particular hardship.

On Thursday, hundreds of Iraqis returned home from Belarus after abandoning their hopes of reaching the European Union. The repatriation came after thousands of migrants became stuck at the Poland-Belarus border amid rising tensions between the two countries.

Kalo’s family was among 430 people who flew from Minsk back to Iraq, where 390 got off at Irbil International Airport before the flight continued to Baghdad.

The West has accused Belarus President Alexander Lukashenko of using the migrants as pawns to destabilize the EU in retaliation for its sanctions imposed on his authoritarian regime following a harsh crackdown on internal dissent. Belarus denies engineering the crisis, which has seen migrants entering the country since summer, lured by easy tourist visas, and then trying to cross into Poland, Lithuania and Latvia, all EU members.

Kalo didnt mind if a geopolitical game was being played at his expense if it got his family out of Iraq.

So what if I was a pawn in someones hands if it gets me to Germany? he said.

Since being displaced, the family had gotten increasingly desperate. Their tent burned down in an accidental fire in June that ravaged the Sharia camp, also in Dohuk. They tried to return to their original home in Sinjar but found their house uninhabitable.

Tensions also were simmering in the area between a patchwork of rival militia groups, Iraqi forces, and members of the Kurdistan Workers Party, or PKK, an insurgent group outlawed by Turkey. Turkish jets still targeted PKK members in northern Iraq.

Then he heard from friends about Kurds finding their way to Germany after Belarus eased visa requirements last spring. He begged his brother in Australia to wire him $9,000 to pay the smugglers’ asking price for his wife, three young children and mother.

He also had saved money from his time as a policeman cash that was hard-won because he endured discrimination as a Yazidi. Colleagues refused to eat or share a room with him, he said. He asked for a reassignment, but his superior said this would only be possible if he gave him half his income.

What good is a job if its still not enough to feed your family? he said of his decision to quit.

The Kalos took the land route to Istanbul in September, and boarded flights to Minsk the following month. There, they headed straight to the Polish border. With two other Iraqi families, the Kalos dug under the border fence, reaching the other side in darkness.

They walked for four days in search of a GPS point where they were promised a car would meet them and take them straight to Germany.

But that never happened..

Instead, on the fourth day, Kalos family ran out of food as temperatures dropped in the dense and soggy forest.

Polish authorities found them and sent them back across the border. They were greeted by an encampment of hundreds of migrants. Belarusian authorities were handing out wire cutters and pushing the migrants back through the razor wire.

Polish authorities used water cannons to repel them. But this did not deter Belarusian authorities, who beat and threatened them, Kalo said. He said they shouted: Go (to) Poland!

Still, husband and wife fought to stay, agreeing that anything was better than their life in a tent.

But with his mother struggling to survive as conditions grew increasingly squalid, Kalo sought the pity of the Belarusian authorities. They allowed them to return to Minsk to seek medical help.

Kalo heard the Iraqi government had agreed to repatriate citizens free of charge. He turned to his wife and they considered their choices: Return to their desperate lives in Iraq, or bear the responsibility if his mother died.

But their hope is not lost, Kalo said, as his 5-year old daughter, Katarin, dug her face into his chest at the Karbato camp.

I have two priorities now,” he said. “The first (is) to get a tent of our own. The second, to get back on my feet and leave this country. I will make it this time.

He added: If it was my last day on this Earth, I will spend it trying to leave.”