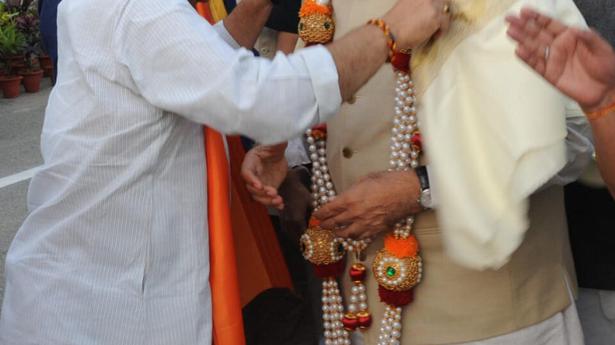 Bommai denies the decision was connected to upcoming Assembly elections in Uttar Pradesh, Punjab and other States

The Chief Minister rejected the claim that the government bowed to the year-long protest and said that the three laws were part of the liberalisation and globalisation process started in 1991-92. The laws were formulated in tune with the previous United Progressive Alliance (UPA) government’s agreement with the World Trade Organisation (WTO). The Congress-led UPA government had signed an agreement with the WTO, he said.

Mr. Bommai said the draft bill was pending during the UPA government and a decision was taken for introducing reforms in agriculture and the agriculture market after obtaining consensus of all States. It was not a question of bowing. Farmers of Punjab and Haryana demanded a regulated market for farm goods. In response to the farmers’ demand, Mr. Modi announced repeal of the laws.

In reply to a question, he denied that repeal of farms laws were connected to Assembly elections in Uttar Pradesh, Punjab and other States. The party won by-elections recently in the midst of farmers’ protest. In order to ensure more discussion and confidence among farmers, laws have been repealed, Mr. Bommai claimed.

‘Did not make a prestige issue’

“The farmers had been protesting against the three controversial laws for the past 15 months. Instead of making it a prestige issue, the government has taken this decision in the interest of farmers,” he said. When questioned on his earlier claims that the farm laws were in the best interest of farmers, Mr. Yediyurappa conceded saying so, but since farmers felt there were problems with these laws they were being repealed. On the death of nearly 700 farmers during the agitation, he said he mourned the death of every farmer and added, “The decision [to repeal the laws] may have been late, but is a good decision.”

Denying that the decision was linked to Uttar Pradesh elections, he said BJP had no competition in the north Indian State. He claimed the Prime Minister had taken the decision to repeal the farm laws ‘only keeping the farmer’s interest in mind’.