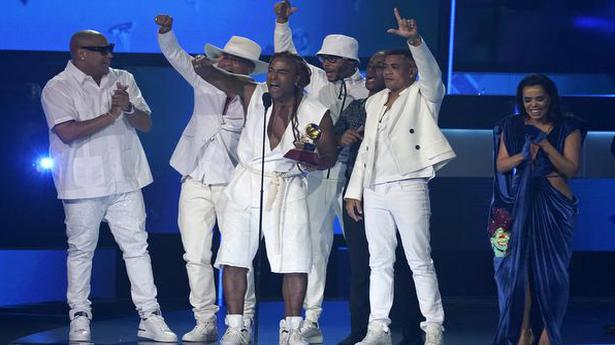 The lyrics refer to ideological intolerance, food shortages and the exodus of young Cubans who see no future on the island

A group of Cuban musicians including reggaeton duo Gente de Zona on November 18 won Song of the Year in the 2021 Latin Grammy Awards for ‘Patria y Vida,’ a defiant hip-hop song that has become the anthem of Cuba’s anti-government protest movement.

Gente de Zona, Yotuel of hip-hop band Orishas fame and singer-songwriter Descemer Bueno collaborated on the song with two rappers in Cuba, Maykel Osorbo and El Funky, who are part of a dissident artists’ collective on the communist-run island.

The group performed on stage in Las Vegas dressed in white in a show of solidarity with fellow activists in Cuba. ‘Patria y Vida’ also won best urban song of the year in the awards.

“This is for my country, for freedom of expression, and for the freedom of the Cubans,” said singer Bueno after receiving the best urban song award early in the night.

The winning song’s title, “Homeland and Life,” is a play on the long-standing Cuban mantra “Patria o Muerte” (“Homeland or Death”) emblazoned on walls and billboards across the island nation since Fidel Castro’s 1959 leftist revolution.

The lyrics refer to ideological intolerance, food shortages and the exodus of young Cubans who see no future on the island.

The song struck a nerve in Cuba. The slogan ‘Patria y Vida’ was chanted by protesters who took to the streets on July 11 this year for rallies believed to be the largest since Castro’s revolution.

‘Patria y Vida’ later became a rallying cry for protests planned for November 15, but those demonstrations fizzled under government pressure, and few Cubans took to the streets.

One of the group’s members, Maykel Osorbo, who was jailed earlier this year in Cuba, was unable to attend the ceremony.

Yotuel, who spoke on behalf of the group after receiving the song of the year award, dedicated the prize to Osorbo.

“To a free Cuba, to Maykal Osorbo, and let us all say,’Patria y Vida,’ Yotuel said before a cheering crowd.