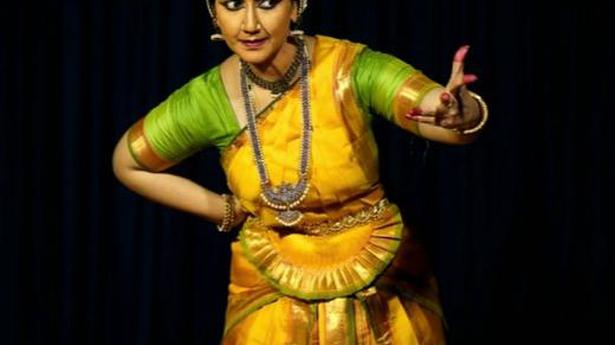 Natyarangam presented Bharatanatyam dancer and teacher Radhika Vairavelavan in ‘Suchinthai Malai’, an endowment programme in memory of the illustrious musician, Dr. S. Ramanathan. The recital was based on Desika Vinayakam Pillai’s Tamizh poetry and translations. That the repertoire was varied — from devotion to Shiva and Sufi philosophy to social issues, including a translation of Omar Khayyam’s Sufi quatrains and the story of Gautama Buddha — showcased the poet’s versatility.

The opening invocation on Shiva was taken from Vinayakam Pillai’s children’s anthology, Malarum Maalayum, set in Shivashakti raga. The talamalika, abstract sollus, which accompanied the crisp retelling of the dancing god’s attributes and leelas grabbed attention. A varnam, based on the Sufi quatrain, ‘The pots criticise the potter,’ drew a similarity between god and potter and the atma as the mud re-cast as different pots.

Timeless questions about life were dealt with neatly in ‘Mannai oru naal oru kuyavan’ (ragamalika, Adi). The treatment was sensitive. The melody was left undisturbed as the melakarta ragas used for the verses were followed by swaras in the same raga for nritta. The music was hauntingly beautiful, as the ragas slowly unfurled the questions and answers to the meaning of life. The music of ‘Anna mella mella ena, amaintha azhugai kural kaetten…’ (pot pleading not to be recast) set in Ganamurthi, blended well with the lyrics. There were more such delectable moments during the next half hour.

The mud rues the fact that fate cannot be changed, and ‘Ezhudhi chellum vidhiyin kai…’ set to Subhapantuvarali, was another poetic extension of the mood. Vinayakam Pillai’s translations were not literal but, as Radhika, a disciple of Ambika Buch, admits, tweaked to suit the context.

There was precision in every department, and fine visualisation took her beyond mere accuracy to touch the soul.

The dancer presented a piece on Buddha’s teachings to a young mother who has just lost her son to a snake bite, and another, ‘Koyil Darisanam’, on the futility of searching for god in temples when god is within one’s self. The thillana (Kalyani, Dharmavathi, Adi tala) was the scene stealer, a commentary on social inequalities, mirrored expertly by the dancer. Radhika alternated everyday scenes in the homes of a wealthy woman and her less fortunate counterpart.

The performance pointed to the excellent teamwork required to pull off such a demanding show.