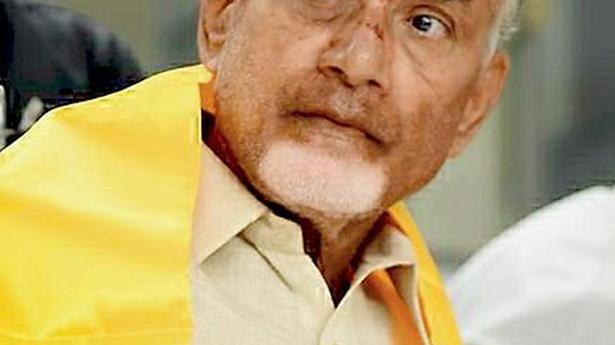 
The Telugu Desam Party (TDP) National president N. Chandrababu Naidu broke into tears and wept over “unsavoury remarks” allegedly made against his wife by the ruling YSR Congress Party (YSRCP) members in the Assembly, on Friday.

While stating that Speaker Tammineni Sitaram did not allow him to condemn the comments made against his wife, Mr. Naidu suddenly wept at the press conference. Wiping down the tears, the Opposition leader asserted that his wife showed least interest in politics. “She never accompanied me unless requested to follow the protocol. She has no knowledge of who is who in the TDP,” he said.

The Speaker, who should have stopped the comments did not utter a word. I will leave it to his prudence, and he should introspect, Mr. Naidu said, adding that he would enter the Assembly only as a Chief Minister.

Recalling that he worked with many stalwarts at national level, Mr. Naidu said that posts were not new.

The TDP always strived for the people and the State. The TDP always has priority for the values. During the last two and half years, there were many criticisms and counter criticisms. Neither as a ruling party nor as an Opposition party had such worst experiences being faced like this, he said.