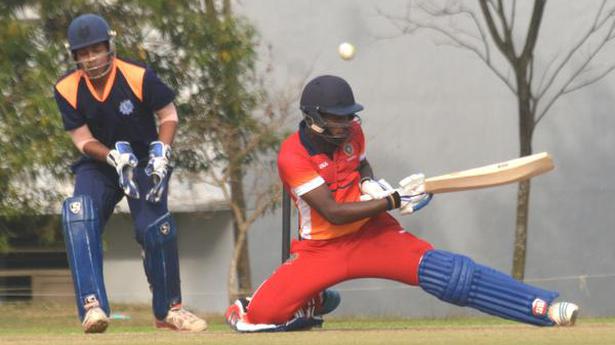 Karnataka & Bengal face off in a contest of depleted teams; Hyderabad plays Gujarat

Defending champion Tamil Nadu will look to continue its dominance of Kerala when they clash in the quarterfinals of the Syed Mushtaq Ali (T20) Trophy at the Ferozeshah Kotla ground on Thursday.

Though unbeaten against Kerala in last four encounters since March 2015, TN can expect a tough challenge. With the Kerala top-order scripting three straight eight-wicket victories, the TN bowlers have their task cut out. In-form Vijay Shankar-led TN will be looking to get into Kerala’s less-tested middle-order as early as possible.

Since the match is scheduled in the morning, toss could be a factor with the teams looking to chase a target than setting one.

Later, Bengal will take on Karnataka for the second time in succession.

In the last week of the league on Nov. 9, Bengal posted a crushing seven-wicket victory in Guwahati to top Group B.

Indeed, this face-off is very unusual since two qualified teams from the same group do not clash before the final.

Since that clash, both teams have lost players picked by the National selectors for India and India-A duties.

Though a less-than-formidable Karnataka managed to cross the line against Saurashtra on Tuesday, it remains to be seen how Bengal deals with the absence of Wriddhiman Saha, Abhimanyu Eshwaran and Ishan Porel.

At the Air Force ground, Vidarbha will look to continue its unbeaten run in the competition when it faces Rajasthan. Deepak Hooda, second on the list of batters with most runs (291) this season, will be one to look out for Rajasthan.

Having topped the Plate group, Vidarbha surprised Maharashtra in a one-sided contest on Tuesday.

The side gave the impression of batting without fear and has the services of some clean strikers like opener Atharva Taide and middle-order batsman Jitesh Sharma whose strike-rate this season stands at an astonishing 246.34 after he scored 202 runs off just 82 deliveries. Unlike some of the other quarterfinalists, these teams are at full strength.

Later in the day, Hyderabad plays Gujarat in the last quarterfinal. Led by opener Priyank Panchal, Gujarat also has a bunch of fine batters. But upfront, it will be looking for a way to stop a rampaging Hyderabad skipper Tanmay Agarwal.

In the five matches of the league, the left-handed opener posted a sequence of 55, 97 not out, 34, 54 and 62 for an aggregate of 302 — most runs so far this season. In fact, Hyderabad also boasts of the highest wicket-taker of the season, left-arm medium-pacer C.V. Milind (16).

Overall, some very keenly-fought, close contests are on the cards.