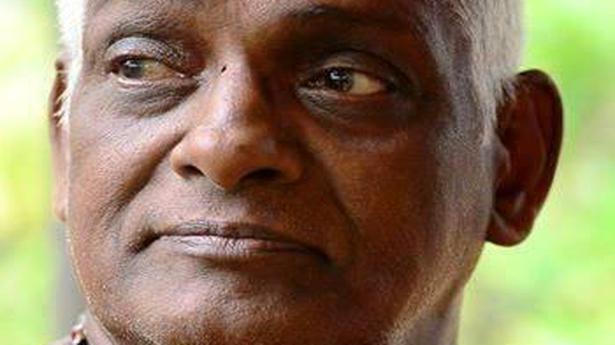 
Donning the pivotal role of Narakasura, Sadanam Krishnankutty ridicules Indra, the lord of heaven, who is cursed to have a thousand eyes all over his body for his lecherous ways. . Narakasura defeats his enemy, Indra, and goes on to loot swarga. The mudra-driven narrative, devoid of background vocals, has the loud chenda-maddalam sound building up the mood of vengeance. The two-hour episode that begins at an extremely slow pace, picks up energy and momentum through the course of the hilarious story. At no point of the strenuous performance would Krishnankutty appear tired.

For the artiste, who just turned 80, Narakasura continues to be a masterpiece role, as if symbolising a career built in the spirit of conquest. Age has not diminished his enthusiasm or stamina, making him an inspiration for young actors.

Krishnankutty is among the best all-rounders in the history of the 400-year-old dance-theatre of Kerala. Be it the virtuous protagonist in the paccha make-up, the ruffian katthi with stylised moustache, the red-hued villain wearing a massive headgear, the witty Hanuman in white beard, a dark-painted demoness or a pretty woman, the master performs each character with consummate ease.

For over 60 years, his signature movements have added sparkle to the Kalluvazhi school style, which has come to define mainstream Kathakali today. His relatively free-spirited approach has contemporarised the artform’s conventional concepts about the measured use of space and method acting.

Recently conferred with an honorary doctorate, Krishnankutty was born in 1941 into a family that had some familiarity with the arts. Cherpulassery, known for its rich heritage in the Valluvanad region of Palakkad district, exposed the boy to classical arts. “My parents used to take us to nearby temple festivals that hosted night-long Kathakali performances,” he recalls. “The green room enchanted me more than the stage.”

When he completed his seventh grade , the family faced a financial setback. Krishnankutty proposed that he would learn Kathakali, and the elders at home agreed. “I was eventually enrolled in 1956 in Sadanam in Peroor, 25 km east of Cherpulassery.

Two young masters from PSV Natyasangham — Kottakkal Krishnankutty Nair and Sankaranarayanan Embranthiri — were Krishnankutty’s gurus initially. At the end of the monsoons the following year, the teenager debuted on stage. “As Krishna in Kalyanasougandhikam,” he recalls. “It went off largely well.”

Shortly after, Krishnankutty got a new master, Thekkinkattil Ramunni Nair, who tutored him along with six others. A disciple of the legendary Pattikamthodi Ravunni Menon (1880-1948), he trained the boys for five years and helped them develop a refreshing approach to the classical form. Old age forced Ramunni Nair to stop teaching. Then came Keezhpadam Kumaran Nair, another frontline Pattikamthodi pupil, with a distinct pedagogy.

Keezhpadam Nair had a profound influence on Krishnankutty. Not only did the disciple learnt to improvise the presentation of traditional Kathakali characters, but the guru-sishya duo started gaining popularity for the reciprocity of their roles on stage. In Kiratham, for instance, Keezhpadam as the hunter (Shiva in disguise) testing the tenacity of Arjuna (doing penance) played by Krishnankutty made the performance a novel experience in the 1990s. Krishnankutty would play Ravana to Keezhpadam’s Hanuman in Thoranayudham. .

Pairing with the celebrated Kalamandalam Gopi, too, won Krishnankutty immense appreciation. His Pushkara and Hamsam alongside Gopi’s Nala have gifted audiences with memorable shows.

Krishnankutty’s eclecticism also stemmed from his stay in Kollam during the 1980s. Kathakali in the Travancore belt emphasises on dramatics with a streak of realism — something that he co-opted and made part of his artistry. He had brief stints as a teacher at different institutions, including his almamater, besides Kalamandalam, Kala Mandir in Patna, and Kalanilayam in Irinjalakuda.

For the past three decades, Krishnankutty has been living at Irinjalakuda. He is still a busy performer, travelling across the globe. Among the awards he has received, the Sangeet Natak Akademi recognition (2007) tops the list.

The writer is a keen follower of Kerala’s performing arts.