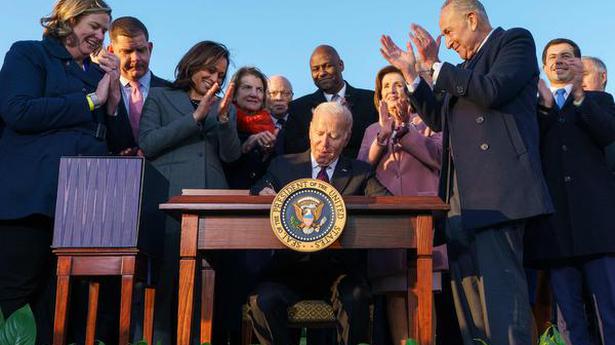 What is the Infrastructure Investment and Jobs Act? Why did it take so long to pass in the U.S. Congress?

The story so far: In a major step towards fulfilling a long-standing promise of the Democratic Party, U.S. President Joe Biden has succeeded in getting Congressional support and signing into law a super-sized infrastructure investment Bill. The once-in-a-generation public expenditure sanction will be an opportunity to refresh the U.S.’s ageing infrastructure . Beyond its immediate effects, the Bill will also consolidate the legacy of the Democrats and Mr. Biden’s administration, not only by aiding in the post-COVID-19 economic recovery of America through fiscal expansion, but also by planting the Party’s flag of achievement on key sectors of the economy for generations to come.

Why was it an uphill task for Mr. Biden to get this act passed in Congress?

The original intent was to get a far broader Bill approved on Capitol Hill, one that could provide a much-needed shot in the arm for an America limping back to normalcy after nearly two years of pandemic-driven economic and social carnage. That Bill, known widely as the “Build Back Better” proposition, speaks to issues such as building a million units of low-income housing, providing universal pre-kindergarten to three- and four-year olds, extending an expanded tax credit for parents, reducing a waiting list for in-home care, further reducing healthcare premiums for those covered under the Obama-era Affordable Care Act (ACA), worker training and higher education. That Bill proposed to finance the enormous jump in public expenses entailed by clamping down on profit-shifting by multinational companies, raising revenue via a 15% minimum tax on the reported profits of large corporations, emphasis on tighter enforcement for large corporations and ultra-high net worth individuals by the Internal Revenue Service, an additional 5% tax on incomes exceeding $10 million a year and another 3% tax on incomes above $25 million, a 1% tax on corporate tax buybacks, and policies to limit business losses for the very wealthy.

While Democrats in theory have the backing of 50 Senators of their party in the Senate and Vice President Kamala Harris could cast a tie breaking vote should the need arise, the passage of this Bill has been foiled so far partly because at least two Democratic Senators, Kyrsten Sinema of Arizona, and Joe Manchin of West Virginia, were holdouts. These Democratic moderates approved of the infrastructure section of the Bill – which had already passed in the full Senate – yet objected to the social welfare measures as above. On the other hand, Democratic progressives including lawmakers such as Pramila Jayapal of Washington state have argued that their Congressional Progressive Caucus would only support the broader vision of the Build Back Better Act, which includes federal paid leave for families, the ambitious climate change programme, two years of free community college, and a substantial expansion in Medicare.

What specific measures does the infrastructure Bill take up?

The Bill, known as the Infrastructure Investment and Jobs Act, aims to make a major contribution towards reducing air and water pollution for communities situated in the vicinity of roadways, airports, by allocating $17 billion to this cause. It would hope to achieve such an outcome by boosting the expenditure on electric vehicle charging stations, school buses, and cranes that will replace petrol- and diesel-burning cars and equipment by $7.5 billion. The Bill would also address run-off from abandoned mines and focus on cleaning up degraded and toxic manufacturing plants — $16 billion has been allocated toward this target. At a deeper level, the infrastructure act targets direct improvements to public health through subtler reforms including spending $65 billion on expanding transmission lines to move vastly greater amounts of clean energy across the grid, giving impetus to cutting down on fossil fuels use. The law also includes $15 billion for replacing lead pipes used for drinking water, which would make a considerable difference to communities impacted by toxicity in drinking water in Flint, Michigan. Similarly, the law throws $30 billion at projects aiming to revamp city sewage systems and wastewater management.

What is at stake for Mr. Biden?

For his big-push vision to succeed, Mr. Biden will have to negotiate with Congressional stakeholders to get the Build Back Better provisions passed as well. The persuasiveness of his White House will determine what prospects the U.S. has of climbing out of the pandemic driven economic downswing.