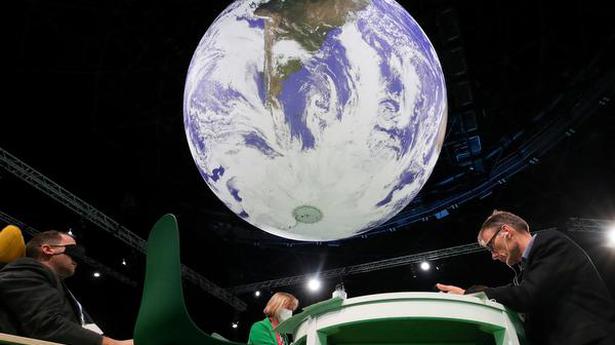 Negotiators at this year’s UN climate talks pored over fresh proposals on Saturday aimed at sealing a deal that could credibly be said to boost the world’s efforts to tackle global warming.

A proposal for the overarching decision retains contentious language calling on countries to accelerate “efforts towards the phase-out of unabated coal power and inefficient fossil fuel subsidies.” But in a new addition, the text says nations will recognise “the need for support towards a just transition” – a reference to calls from those working in the fossil fuel industry for financial support as they wind down jobs and businesses.

Alok Sharma, the British official chairing the talks, said he hoped countries would clinch an ambitious agreement in Glasgow.

“I hope the colleagues will rise to the occasion,” Mr. Sharma told The Associated Press as he walked into the conference venue. Some campaign groups said the current proposals were not strong enough.

“Here in Glasgow, the world’s poorest countries are in danger of being lost from view, but the next few hours can and must change the course we are on,” said Tracy Carty of Oxfam. “What’s on the table is still not good enough.” In another proposal, countries are “encouraged” to submit new targets for emissions reduction for 2035 by 2025, and for 2040 by 2030, establishing a five-year cycle. Previously, developing countries were expected to do so only every 10 years.

The proposed agreement states that in order to achieve the 2015 Paris accord’s ambitious goal of capping global warming at 1.5 degrees Celsius (2.7 Fahrenheit) by the end of the century compared with pre-industrial times, countries will need to make “rapid, deep and sustained reductions in global greenhouse gas emissions, including reducing global carbon dioxide emissions by 45% by 2030 relative to the 2010 level and to net zero around mid-century, as well as deep reductions in other greenhouse gases.” Scientists say the world is not on track to meet that goal yet, but various pledges made before and during the two-week talks, which are now in overtime, have brought them closer.