Jyotika: On films, family and her synergy with Suriya 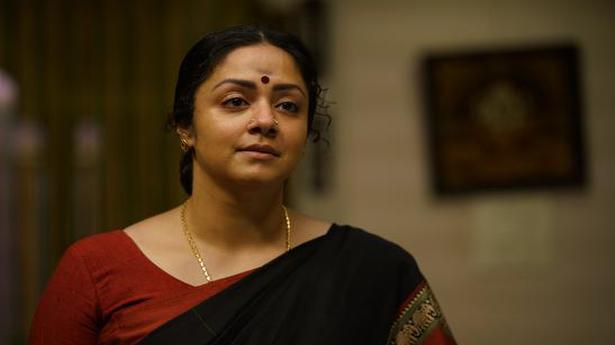 The actor-producer on finding inspiration from Suriya’s mother for family drama ‘Udanpirappe,’ why she’s thankful for streaming platforms, and when she will act with her husband next

There’s an unmistakable sense of calm that engulfs the conversation when Jyotika speaks. The actor-producer is remarkably articulate and insightful, the weight of 20-odd years of acting experience, and being married into a prolific film family behind her.

From the saccharine highs of her roles in romances like Kushi and Mugavaree to more acclaimed, measured performances in blockbusters like Kaakha Kaakha and Sillunu Oru Kaadhal, Jyotika explored the full gamut of emotions and roles in an actor’s career. Or so we thought, till she came swinging hard in her second innings — a few years after focusing on her children — giving a new lease of life to progressive subjects centered on strong women in the Tamil film industry.

Last year, she along with husband Suriya faced both brickbats and flowers for choosing a direct-to-digital release for their films; theatre owners objected, while fans were just eager to see them on-screen, big or small regardless. A year and half later, the couple — who celebrated 15 years of marriage last month on September 11 — seem to have paved the way for theatres and streaming platforms to co-exist, and encourage other filmmakers to follow in their wake.

Read More | Suriya and Jyotika ink deal with Amazon; will release four films in the next four months

Jyotika’s new offering Udanpirappe (her 50th film) seems to follow the same tone set during her other recent outings; the actor headlines the family-drama in which she plays a strong central character torn between her loyalties to the two most important men in her life: her husband and brother. But perhaps there’s more to the rural film, directed by Era Saravanan, than that meets the eye.

In Goa on vacation with her family (“Schools haven’t opened yet, so it was a good chance to plan a quick getaway with the kids,” she gushes), Jyotika is taking a break to promote the film before it releases October 14 on Amazon Prime.

“It’s all part of the job, I have learnt to balance it out,” she says lightly, on her having to do press junkets even on holiday, before settling into our phone call. Excerpts from an interview:

The central theme of Udanpirappe is the sibling bond you share with your brother (played by Sasikumar), and his conflict with your husband in the film. It’s quite unlike any of your previous roles; did you tap into these emotions from any real-life relationships?

I do have a brother, who is eight years younger to me, but the reference for a film like this is not from any of the connections in my family. It is actually from Suriya’s household!

It is mostly from my mother-in-law — I call her ‘Amma’ — and the sisters in her family, how they bond, behave and so on. Amma is the epitome of calm and subtlety at home; she always has this silence and conviction that whatever happens, things will eventually pass. There are lots of things I have imbibed from her nature and demeanor.

I have also made umpteen trips to Suriya’s village over the years, which is just an hour’s drive from Coimbatore, and have constantly been fascinated by the women there. They are so different from me, and the women I know in my life, or in a city like Chennai. Even Suriya’s home in itself is very traditional; it served as an inspiration for me to frame someone like Maathangi from Udanpirappe.

Has the way you research or prepare for a film changed these days, as opposed to earlier? You’re taking on far more layered roles since your comeback…

Well, this is actually the first time I’ve played such a character in a rural setting before. I did it to some extent in Dumm Dumm Dumm, but even that wasn’t too vastly different either. The only actor who has aced several roles like this is Radhika ma’am. Watching some of her films was a huge inspiration for me to play Maathangi with dignity and depth.

Back then (in movies like Dumm…), sometimes it was a fluke (laughs); I just did whatever I knew and hoped it worked out. But now in my second innings, I do a lot of homework to prepare for a film. I learn all my dialogues, think of every single shot, and even ask for my scripts two months in advance. I feel I need to treat my work with more maturity now, as these roles are quite deep and intense.

Both you and Suriya took the bold decision to be one of the first Tamil film production houses to explore direct digital premieres in 2020. Last month, you took it a step further by inking an exclusive deal with Amazon Prime. Do you feel your choices are justified now?

You know, when we took calls on deciding to release Soorarai Pottru and Ponmagal Vandhal digitally, it was during the time of deep lockdown. 2D was making six films; two were completed, and four were under production. There was a lot of money rolling, and the outlook seemed very bleak. We didn’t know when the pandemic was going to end, and it was all about business and settling matters at that point. Lots of producers’ homes — ours and smaller ones — depend on a film’s release. That’s how we decided.

Having said that, now I definitely feel that streaming platforms are such a massive boon for filmmakers. We are able to make smaller movies with pride, choose the content we want, and are able to feel ‘equal’ alongside a big-budget hero’s release. For the first time in my career, after 50 films, I’m getting a festival release; isn’t that special?

A film like Raatchasi was able to reach a pan-Indian audience, and was among the most-watched Tamil films digitally… more than some hero-headliners. Finally, we have a platform for women-centric films — as they are called — where family audiences can watch them. So I have to welcome this.

So 2D Entertainment will continue making films for both theatrical releases and streaming platforms in the future?

I am nobody to comment on this, but yes, I definitely feel this is a healthy way of working; it is for the good of everyone in the filmmaking family. We aren’t putting anyone down, are we? When you have 20-odd films waiting to release, it’s obvious that some won’t get a theatrical release. This option gives low-budget flicks a choice and a chance, plus it opens to an audience from over 250 countries. The best option is to co-exist like this now. Most of your recent films have showcased you in a strong, titular character that’s fighting for a change in society. Not that you’re being typecast, but will you explore other genres again? A full-on romance, for instance?

I really am open to absolutely anything, but I’ll always have my kids in mind while choosing a film these days. They are my priority. But I also don’t want to come off as just being an advisory figure all the time.

The women in Tamil Nadu are extremely dignified, but in more than 80 percent of the films, they aren’t shown the right way. We are not the way we are projected on screen, those are not the clothes we wear, that is not the way we behave, and we definitely aren’t chasing men all the time.

Also Read | Suriya comes out in support of Jyotika: ‘Our kids should know that humanity is more important than religion’

When men see themselves on screen, they see powerhouse characters, winning at everything from action to romance. But from a woman’s perspective, what is there to root for? We are almost always weak personas, and relegated to the background.

This is all I’m trying to do: Everytime a woman walks out from a film of mine, she should see herself (on some level) represented on screen, and feel relevant. It could be a comedy, action drama, or a family affair; it’s all about showing how a woman in TN is, in reality.

You played a lawyer in Ponmagal Vandhal; now Suriya does the same in your next production, Jai Bhim. Did both of you exchange courtroom notes?

This has happened quite by chance (smiles). We have both played lawyers, but his script is on a different track altogether. My character is fictional, while Suriya’s role in Jai Bhim is inspired from a real-life person. But yes, there is a little bit of give and take that we share as actors always. For instance, during Ponmagal.. we decided to shoot some of the lengthy monologues in a single take and there was some active collaboration there. A lot of it was edited in post-production, but that’s an example of the kind of synergy we share.

How have the events of the pandemic influenced you as a person and a creator?

I haven’t shot for the last two years. After the initial six-month break, Suriya had to go back to the sets, but I made the choice to stay back at home with the kids, as one of us had to take care of them. It was a long break, but I honestly quite enjoyed it. 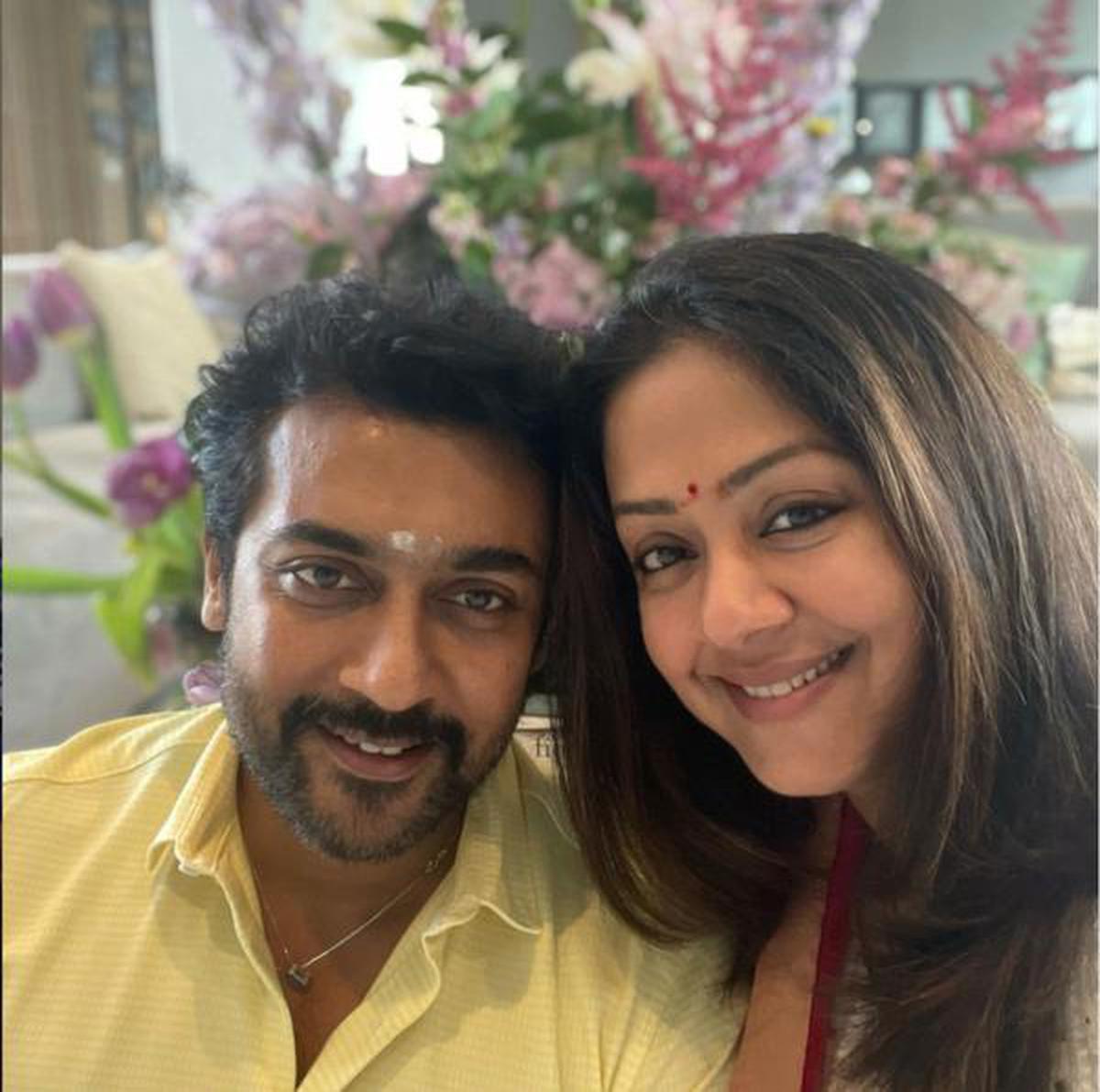 We, Suriya and I — both indidvually and together — really rediscovered ourselves and improved our quality of life. I started baking and sketching (something I thought I could never do), we traveled to our native family homes, and made some fantastic memories together. That’s been my biggest takeaway from the pandemic.

Can we see you and Suriya on-screen together again?

We are ready. But it’s just about waiting for the right script to come, at this point. We both haven’t heard anything that has been better than our previous films together. We really want our next film — after all these years — to be special.

Our best film on-screen, as a couple? Kaakha Kaakha, absolutely. I really liked what we did in Perazhagan together as well, but nothing can match the Maya-Anbuselvan romance in Kaakha Kaakha.