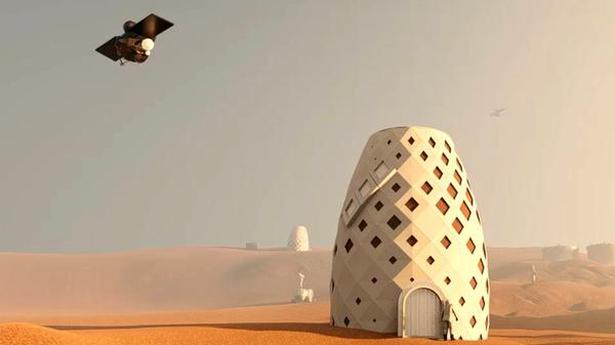 Imagine living on Titan – Saturn’s largest moon – or the planet Mars, or the exoplanet which goes by the name TRAPPIST-1e. The thrilling stuff of science fiction, right? But it could some day turn into reality; leaving planet Earth to colonise a faraway planet or a big-enough moon.

But how will these strange, inhospitable environments be tamed? That’s exactly what around 1,100 students across Kerala set out to do last week as part of the World Space Week (WSW) celebrations – designing ‘space habitats’ for space pioneers of the future. The event was organised jointly by units of the Indian Space Research Organisation (ISRO) situated in the State capital.

Team Exploding Stars from the Indian Institute of Space Science and Technology (IIST) (Shantanu Shakya, Soumyadip Bhunia, Moksh Bhateja and Jyoti Bhramar Manjul) took home the first prize in the college division for designing a space habitat on Mars. Their habitat was ‘located’ in the the Martian valley Reull Vallis.

Focussing on the need for self-sufficient habitats, the winning entries sought to present innovative ideas for for shelter, farming and production units, transportation, energy and communication networks and water and waste-management facilities.

Overall, the ‘Space Habitat Challenge’ saw participation by 1,100 students from all over the State in 252 teams. The top five teams from both categories presented their works before a panel of experts on October 9.

The teams were encouraged to undertake research into habitable conditions on extra-terrestrial bodies, choose a suitable planet or moon to set up a sustainable habitat and study the infrastructure required to facilitate human life there, a spokesperson of the Vikram Sarabhai Space Centre (VSSC) said. All the submissions were technically correct and displayed maturity much beyond expectations, the official said.