HomeNewsArea near KIA terminal gets flooded after rains
News

Area near KIA terminal gets flooded after rains 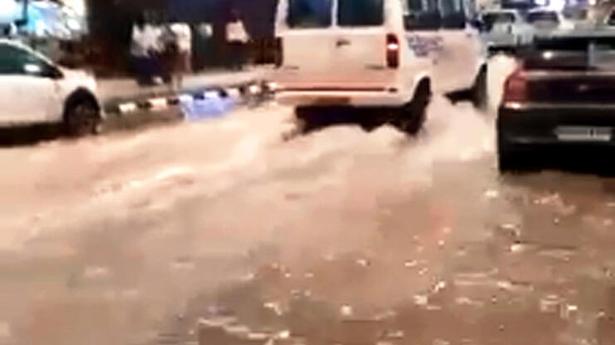 People roping in tractors to reach the airport. Passengers wading through muddy water with their luggage. These were some of the scenes around Kempegowda International Airport (KIA) as heavy rains lashed the city late on Monday evening and night. At the airport itself, the terminal area where passengers alight from taxis and private cars was flooded. Passengers had to drag their luggage through the waterlogged area to reach the terminal.

It was a nightmare for passengers to reach the airport. The approach road near Mylanahalli was inundated. People got a tractor to make their way to KIA. A video went viral on social media showing passengers wading through muddy water and clambering onto a tractor.

“I have never seen this kind of waterlogging inside the airport campus. I had to pick up passengers from the arrival point. Starting from Ola, Uber parking points till Galamma circle the roads were flooded. Traffic was badly hit for more than two hours,” said Harish Kumar, a taxi driver.

Waterlogging at CISF junction forced airport staff to redirect traffic movement in the area. “Many drivers parked their vehicles on the side of the road. Passengers had a tough time reaching the terminal area owing to traffic jam. Airport staff were guiding the drivers. Through social media we sent out messages asking motorists to avoid roads leading to CISF junction,” said Vinayaka, another taxi driver.

A KIA spokesperson said, “Our team was immediately pressed into action and the issue has been resolved,” Poor weather conditions impacted flight operations. As of Monday evening, a total of 11 departing flights from Bengaluru to various destinations were delayed.