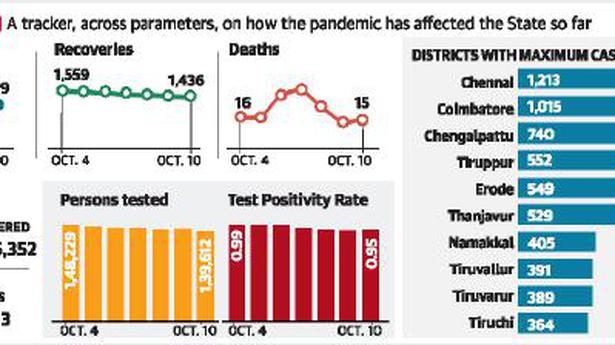 
With another 1,329 persons testing positive in the State for COVID-19 the total number of persons under treatment went up to 16,130. A total of 1,39,612 persons were tested in a day for the infection.

In Chennai 171 fresh cases were diagnosed taking the district’s tally of active cases to 1,846. In Coimbatore another 132 persons tested positive and 1,634 persons are curently undergoing treatment either at home or in healthcare facilities there.

In a day, 1,436 persons were discharged post-treatment, bringing up the total number of persons discharged till date to 26,26,352.

In Chennai till date 5,51,611 persons have tested positive of which 5,41,257 persons have been discharged post-treatment. The district has recorded 8,508 deaths till date.

Of the 15 persons whose death was recorded in a day three undergoing treatment in private hospitals and 12 others admitted in government hospitals. Till date 35,783 persons under treatment in hospital have succumbed to the infection.

It was one of those days when Chennai did not record any deaths. However, the most number of deaths, 3, was recorded in Tiruvarur. Vellore, Thanjavur, Salem, Nagapattinam and Chengalpattu, each recorded two deaths. One person each in Madurai and Perambalur died of the infection.

While four persons who had contracted the infection and were under treatment had no co-morbidities but had died of the infection 11 others had pre-existing conditions leading to their demise.

An 83-year-old man from Thiruvarur who was admitted on Sept 26 in Thiruvarur Medical College Hospital after testing positive for the infection died on Oct 8 and the hospital recorded his death as due to COVID-19 pneumonia.