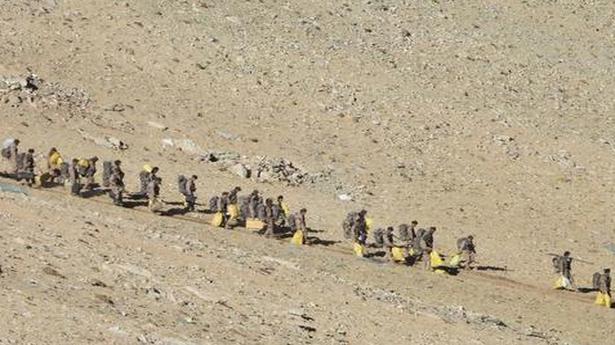 
China’s military in a statement late on Sunday, October 10, 2021, said India had made “unreasonable and unrealistic demands” at Sunday’s 13th round of talks between Corps Commanders, suggesting a stalemate in the long-running negotiations to defuse the crisis in Ladakh along the Line of Actual Control (LAC).

India and China held the 13th round of Corps Commander talks on Sunday at Moldo on the Chinese side with a focus on working out the third phase of disengagement from patrolling Point 15 in Hot Springs as part of overall disengagement and de-escalation along the LAC. The talks began around 10:30 am at Moldo and concluded at about 7 pm, a defence official said.

At the time of writing, India was yet to put out a statement on the talks, and the Chinese military statement’s on Sunday suggests, unlike some of the previous rounds, there will be no joint statement. The statement on Sunday night came not from China’s Defence Ministry in Beijing, as was the case in some of the earlier rounds, but from the PLA Western Theatre Command in Chengdu, which has in recent rounds appeared to have taken over the responsibility for putting out statements on the LAC situation, seen by some observers as Beijing placing less importance on the slow moving negotiations.

In addition to the overall disengagement and de-escalation, the two sides had also agreed to work out new protocols for patrolling to ensure such instances do not occur again. Since the stand-off began in May last year, the two sides have held a series of talks at different levels, political, diplomatic and military, and as part of agreements reached have undertaken disengagement from both sides of Pangong Tso in February and the Patrolling Point 17 at Gogra area in August. The other friction areas that remain are Demchok and Depsang. Officials said while an agreement for resolving Hot Springs is within reach, Demchok and Depsang are legacy issues and are tough to resolve.

The PLA statement did not suggest any agreement reached on either disengaging or on new protocols. PLA Senior Colonel Long Shaohua, spokesperson for the Western Theatre Command, said “China had made great efforts to promote the easing and cooling of the border situation and fully demonstrated its sincerity in order to maintain the overall situation of the relations between the two militaries.”

“However, India still insisted on the unreasonable and unrealistic demands, which made the negotiations more difficult,” he said, adding that “China’s resolve to safeguard national sovereignty is firm”. He called on India “to not misjudge the situation” and to “cherish the hard-won situation in the China-India border areas and abide by relevant agreements and consensus between the two countries and the two militaries.”

The PLA’s comment on India making “unrealistic demands” stands in stark contrast to India’s view on the LAC crisis, which began in April 2020 when the PLA amassed thousands of troops along the LAC, carried out multiple transgressions in eastern Ladakh, and disregarded the many previously agreed upon border agreements aimed at keeping the peace.

While negotiations have led to disengagement in some of the areas, thousands of PLA troops remain in forward areas. Both External Affairs Minister S. Jaishankar and Army Chief General Naravane, speaking over the weekend, said the PLA was yet to give a credible explanation for their amassing of troops last year in contravention of multiple agreements, and stressed that until and unless there was both disengagement, de-escalation and a return to normalcy, Indian troops would remain deployed to match the Chinese and there would be no normalcy in the broader relationship.

General Naravane highlighted the large-scale build-up as well as infrastructure development on the Chinese side and said that if they continue to stay there through the second winter, it “definitely mean that we will be in a kind of Line of Control situation though not an active LoC as is there on the western front.” He further added, “So, it means that they [China] are there to stay. We are keeping a close watch on all these developments, but if they are there to stay, we are there to stay too.”