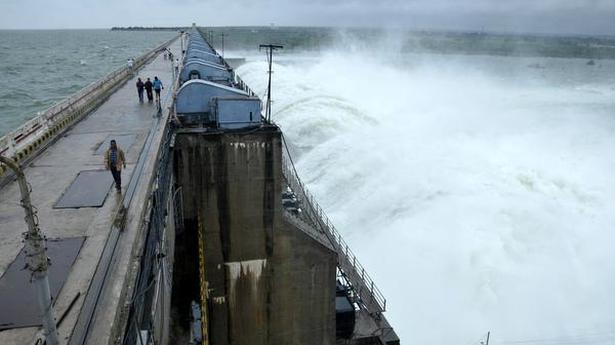 
A meeting of the Godavari River Management Board (GRMB) on implementation of the board purview, scheduled from October 14 as per a gazette notification issued by the Ministry of Jal Shakti on July 15, was held here on Monday to collect the information about the Godavari Basin projects in Telangana and Andhra Pradesh.

However, the two States stuck to their stand taken already — AP insisting on all projects in the Basin in Telangana to be brought under the board purview, while Telangana opposing it on the ground that there is no need to hand over the management of projects which have clear water allocation. At the same time, they were unwilling to give up the management of some projects in the Basin on the pretext that they were utilising water going waste into the sea.

The Telangana authorities led by Special Chief Secretary Rajat Kumar attended the meeting and suggested that river board to take up the management of only Peddavagu medium irrigation project on experimental basis to begin with. The project constructed across Peddavagu, a tributary of Godavari, near Aswaraopet in Bhadradri-Kothagudem district, has over 2,000 acres ayacut in Telangana and over 13,000 acres in A.P.

It is stated that the board authorities too have decided to focus to make a start by taking up the management of Peddavagu project to begin with.

Telangana authorities were understood to be of the view that the success of the Peddavagu management by the river board could encourage the member States give their nod to a few more projects. On the other hand, the authorities have also brought to the board’s notice that Chief Minister K. Chandrasekhar Rao had already taken up the issue of postponing the implementation of purview with the Centre and they were hopeful of a positive response.

The meeting was chaired by GRMB Chairman J. Chandrashekhar Iyer and was attending by officials of Telangana and A.P. as also those of the river board. The board authorities have also asked the two States to submit the DPRs of other projects mentioned in the schedules at the earliest.