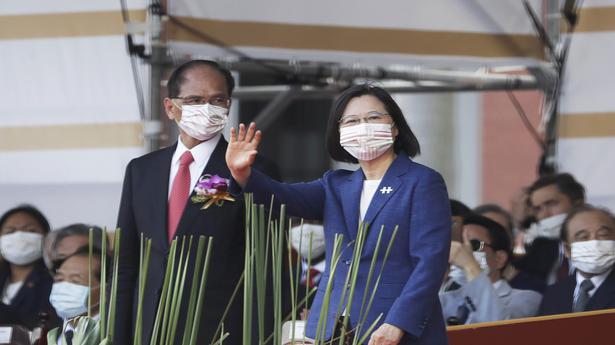 Tsai Ing-wen said Taiwan’s “position on cross-strait relations remains the same: neither our goodwill nor our commitments will change.”

Taiwan President Tsai Ing-wen said on Sunday Taiwan will not “bow to pressure” and would “resist annexation”, speaking amid rising tensions with China and a day after Chinese President Xi Jinping pledged to realise “complete reunification”.

Ms. Tsai, during her National Day address in Taipei, said Taiwan’s “position on cross-strait relations remains the same: neither our goodwill nor our commitments will change.” “We call for maintaining the status quo, and we will do our utmost to prevent the status quo from being unilaterally altered,” she said, adding that “resolving cross-strait differences requires the two sides of the strait to engage in dialogue on the basis of parity.”

Also read: Worldview with Suhasini Haidar | Should India be worried about China-Taiwan tensions?

“We hope for an easing of cross-strait relations and will not act rashly, but there should be absolutely no illusions that the Taiwanese people will bow to pressure,” Ms. Tsai said.

The status quo has been coming under stress, with China’s air force in recent days carrying out a series of aerial intrusions into Taiwan’s Air Defence Identification Zone, with a record 38 aircraft on October 1, when China marked its National Day, followed by 39 on October 2 and 56 on October 4. Taiwan’s Defence Minister described the current tensions as the worst in 40 years.

Mr. Xi on Saturday vowed that “reunification will be realised” and warned against any “external interference” on the Taiwan question, which is among the issues straining China-U.S. ties. He was speaking in Beijing a day ahead of October 10, which is marked in Taiwan as its National Day and celebrated in China as the anniversary of the 1911 Xinhai Revolution which led to the fall of the Qing Dynasty and the establishment of the Republic of China (ROC). Following the Chinese Civil War, Chiang Kai-shek’s Kuomintang fled to Taiwan and declared Taipei as the ROC’s capital in 1949, while Mao Zedong’s Communist Party established the People’s Republic of China. The Communist Party still views Taiwan as its “province” and has pledged “reunification” as its goal.

Ms. Tsai said Taiwan “will continue to bolster our national defence and demonstrate our determination to defend ourselves in order to ensure that nobody can force Taiwan to take the path China has laid out for us.” “This is because the path that China has laid out offers neither a free and democratic way of life for Taiwan, nor sovereignty for our 23 million people,” she said.

On the aerial intrusions, Ms. Tsai said “the routinisation of Chinese military activity in Taiwan’s southwestern air defense identification zone has seriously affected both our national security and aviation safety.” “The situation in the Indo-Pacific region is becoming more tense and complex by the day. After taking complete control of Hong Kong and suppressing democracy activists, the Beijing authorities also shifted away from the path of political and economic development that they had followed since ‘reform and opening up’ began decades ago. At the same time, regional order is being challenged in the South and East China Seas,” she said.

She called on the people of Taiwan to ‘renew with one another our enduring commitment to a free and democratic constitutional system” as well as a “commitment to resist annexation or encroachment upon our sovereignty.”

The Taiwan President also highlighted Taiwan’s importance in supply chains underscored by the global shortage of semiconductor chips, as well as its geopolitical importance because of “a changing situation in the Indo-Pacific.” She referred specifically to the Quad – the India, Australia, U.S., Japan grouping — among those paying attention to the security situation the strait, saying that “the G7, NATO, EU, and Quad have all highlighted the importance of peace and security in the Taiwan Strait, while expressing concern over whether China may unilaterally undermine the status quo of peace and stability in the Indo-Pacific region.”