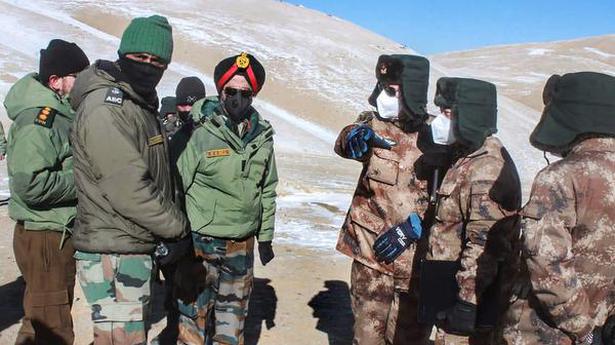 Efforts are on to work out the third phase of disengagement from Patrolling Point 15 in Hot Springs as part of overall disengagement and de-escalation along the Line of Actual Control in eastern Ladakh.

India and China held the 13th round of Corps Commander talks on Sunday at Moldo on the Chinese side with focus on working out the third phase of disengagement from patrolling Point 15 in Hot Springs as part of overall disengagement and de-escalation along the Line of Actual Control (LAC) in Eastern Ladakh.

The talks began around 10:30am at Moldo, a defence official said. The Indian side was led by the Army’s Leh based 14 Corps Commander Lt Gen P.G.K. Menon.

In addition to the overall disengagement and de-escalation, the two sides had also agreed to work out new protocols for patrolling to ensure such instances do not occur again.

Since the standoff began in May last year, the two sides have held a series of talks at different levels, political, diplomatic and military, and as part of agreements reached have undertaken disengagement from both sides of Pangong Tso in February and the Patrolling Point 17 at Gogra area in August.

In Eastern Ladakh, India and China have two mutually agreed disputed areas, Trig Heights and Demchok, and 10 areas of differing perception. As reported by The Hindu earlier, officials said since the stand off last year, additional five friction points have emerged. These include Km 120 in Galwan area, Patrolling Point (PP) 15 and PP17 and Rechin La and Rezang La on the South Bank of Pangong Tso.

While Demchok is one of the two mutually agreed disputed areas in Eastern Ladakh, Depsang is one of the eight friction points in the area. In Demchok where there are claims in the Charding La area, China has set up tents on this side of Charding nala.

Officials said while an agreement for resolving Hot Springs is within reach, Demchok and Depsang are legacy issues and are tough to resolve.

Ahead of the talks, speaking at an event on Saturday Army Chief Gen Manoj Naravane noted that it was a matter of concern that the large-scale build-up has occurred and continues to be in place, and to sustain that kind of a build-up, there has been an equal amount of infrastructure development on the Chinese side.

Stating that if they continue to stay there through the second winter, it “definitely mean that we will be in a kind of Line of Control (LoC) situation though not an active LoC as is there on the western front,” Gen Naravane added, “So, it means that they (China) are there to stay. We are keeping a close watch on all these developments, but if they are there to stay, we are there to stay too.”