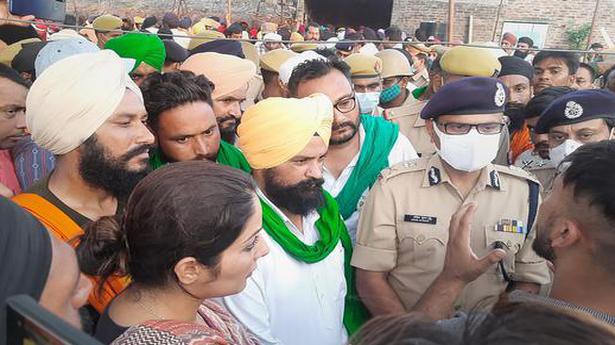 The family of one of the four farmers who was killed in Tikonia in the violent incident involving the convoy of Union Minister of State for Home Affairs Ajay Mishra, on Tuesday demanded that a fresh autopsy be conducted and refused to accept the findings of the post mortem report.

Taiwan Defence Minister Chiu Kuo-cheng said on Wednesday, October 6, 2021, that China will be capable of mounting a full scale invasion of the democratic island by 2025.

Telegram’s founder Pavel Durov said on Tuesday that the encrypted messenger app had added a “record” 70 million users in one day after Facebook was hit by a massive outage.

Potentially billions of users were impacted on Monday when the dominant social network and its Instagram and WhatsApp platforms went offline for seven hours.

Rating agency Moody’s Investors Service has upgraded India’s sovereign rating outlook to ‘stable’ from ‘negative’ citing an ebbing of the risks from COVID-19 and the negative feedback between the real economy and financial system.

Facebook Inc.’s services suffered a massive outage on Monday for as long as six hours. It kept several users from accessing the company’s core platforms like WhatsApp, Instagram and Messenger apps. It also disrupted businesses around the world that rely on the social network’s tools and services.

There is an “urgent need” to understand the “weaknesses and strengths” of the 13th Amendment to the Sri Lankan Constitution and “act accordingly”, President Gotabaya Rajapaksa on Tuesday told Foreign Secretary Harsh Vardhan Shringla, while expressing a desire to revive the spirit of the relations of the 1960s and 1970s.

The Supreme Court on Tuesday said the tragedy of medical education in the country was that it had become a business.

The observation came while the court pulled up the government and the National Board of Examinations for making last-minute changes to the pattern of the National Eligibility-cum- Entrance Test- Super Specialty (NEET-SS) 2021.

The Narcotics Control Bureau has arrested two more persons in connection with the case of seizure of banned drugs from a cruise ship off the Mumbai coast, an NCB official said on Tuesday, October 5, 2021.

Chennai Super Kings skipper Mahendra Singh Dhoni made it amply clear that he would be wearing his favourite yellow jersey for at least one more season and the ‘Whistle Podu’ army will certainly see him playing a “farewell game” at their beloved Chepauk.

Mumbai Indians came up with a performance as clinical as it could get and must be hoping it didn’t come just a little too late in the day. In a must-win game, MI crushed Rajasthan Royals by eight wickets, with 11.4 overs to spare, at the Sharjah Cricket Stadium on Tuesday.

India on Tuesday pulled out of next year’s Birmingham Commonwealth Games’ hockey competition, citing COVID-19 concerns and UK’s discriminatory quarantine rules for travellers from the country, a day after England’s withdrawal from the junior men’s World Cup in Bhubaneswar over similar reasons.

The Nobel Prize for physics has been awarded to scientists from Japan, Germany and Italy. Syukuro Manabe (90) and Klaus Hasselmann (89) were cited for their work in “the physical modeling of Earth’s climate, quantifying variability and reliably predicting global warming”.

The second half of the prize was awarded to Giorgio Parisi (73) for “the discovery of the interplay of disorder and fluctuations in physical systems from atomic to planetary scales.”