Modi is a puppet in RSS hands, says H.D. Kumaraswamy 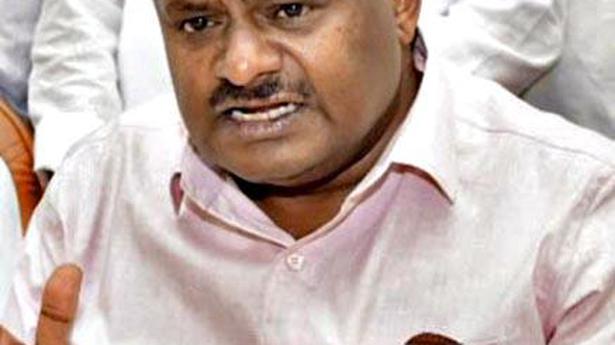 Former CM says RSS has trained over 4,000 bureaucrats in India who conform to its ideology

Former Chief Minister and Janata Dal (S) leader H.D. Kumaraswamy on Tuesday alleged that Prime Minister Narendra Modi was a “puppet” in the hands of the Rashtriya Swayamsevak Sangh (RSS) while Chief Minister Basavaraj Bommai was functioning under the directions of the RSS office here.

This drew a sharp reaction from the Bharatiya Janata Party (BJP), which said the comments were politically motivated and made with an eye on elections.

Speaking to reporters, the former Chief Minister said BJP leaders, both at the centre and the state, did not enjoy freedom. He asked why the leaders go to the RSS office wherever they go. “Politically, the BJP is not independent and is controlled by the RSS. The State Government is completely RSS. Basavaraj Bommai is the second Chief Minister to have visited Keshava Krupa,” he said.

Saying that the agenda of the RSS was not development, he said people were being led towards Manusmriti. “Governments should focus on the poor. The RSS ended the political career of L.K. Advani who had praised Jinnah. It has not given anything but Hindutva and communalism. It has also trained more than 4,000 bureaucrats in India who conform to its ideology,” Mr. Kumaraswamy said.

Questioning the need for an anti-conversion Bill, he said, “Instead, people should be empowered with education, employment, and financial strength. You should build trust in people. It is not possible to prevent conversion with the Bill. If education, health and housing are a given, there would be no conversion.” He also blamed the Congress for the current problem.

Condemning Mr. Kumaraswamy’s attack, BJP state general secretary N. Ravikumar said the RSS neither interferes in the functioning of the government nor imposes its ideology. “It stands for a nation-first policy. There are many in politics and other sections of society who have been trained by the RSS. It runs thousands of schools in the country and assists during any natural calamity. What is wrong if someone is trained by the RSS?” he asked.

Expressing surprise over the comments, he added, “Mr. Kumaraswamy has, in the past, appreciated the functioning of the RSS. He is making a political statement now that elections are closer. He is trying to criticise the RSS because the Congress has been calling the JD(S) the BJP B-team.”

Later, taking to Twitter, Mr. Kumaraswamy said, “People should know the truth. I am not afraid of telling the truth. My statements were not in favour of or opposed to anyone. My intention is that the truth should be discussed.”