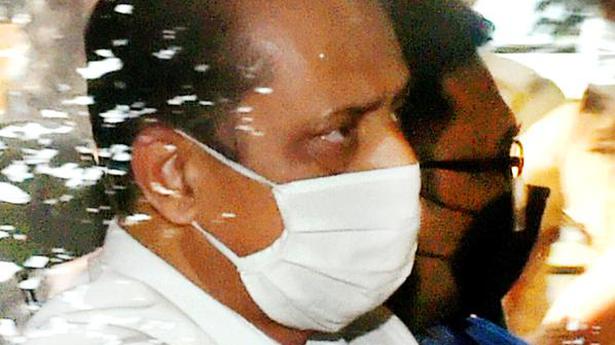 The Bombay High Court on October 6 directed the National Investigation Agency (NIA) to file an affidavit in response to a plea filed by dismissed Mumbai police officer Sachin Waze, arrested in the Antilia bomb scare and businessman Mansukh Hiran murder case, seeking to be placed under house custody.

Mr. Waze was arrested by the NIA in March this year and was later sent to judicial custody. Last month, Mr. Waze was permitted by a sessions court to be admitted to a private hospital where he underwent bypass surgery.

Mr. Waze later sought permission from the special NIA court to be placed under house arrest so that he could recuperate. Mr. Waze had stated that he was vulnerable to infection if he is asked to stay in jail.

On October 6, Mr. Waze’s plea came up before a division bench of Justices Nitin Jamdar and Sarang Kotwal.

Mr. Waze’s advocates Sudeep Pasbola and Rounak Naik told the court that Mr. Waze has been discharged from the private hospital and shifted to the Taloja prison in Navi Mumbai.

They added that the prison hospital was in poor condition and not well-equipped.

The Bench then directed the NIA to file an affidavit in a week.

Mr. Waze in his petition said he stands a high risk of contracting infections as his surgery was recently performed and his health would be further jeopardized if he is asked to stay in jail.

The plea added that if house arrest permission is granted, Mr. Waze would be put in a separate room in his residence where complete seclusion would be maintained.

The Hindu6 mins ago
5