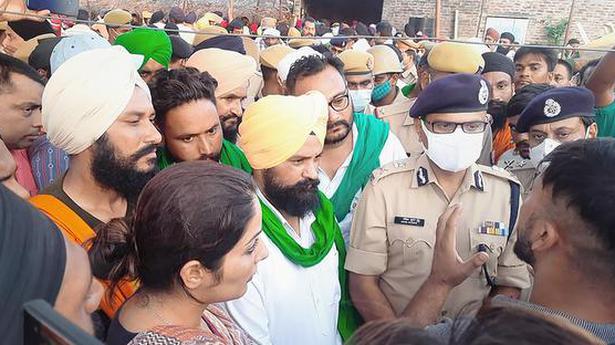 The body was cremated in his village in Bahraich district.

The second autopsy report of farmer Gurvinder Singh, one of the eight killed in Lakhimpur Kheri on Sunday, also did not mention any bullet injuries, his family said on Wednesday a day after they had rejected the first autopsy. The body was, meanwhile, cremated in his village in Bahraich district, his family said.

Gurvinder was one of the four farmers killed in the violent incident involving the convoy of Union Minister of State for Home Affairs Ajay Mishra in Tikonia. His family had demanded a fresh autopsy after they refused to accept the findings of the post-mortem report. The family said that the first autopsy report showed Gurvinder had died of internal injuries but it alleged that he was shot dead by Ashish Mishra, the Minister’s son, while trying to escape into the fields following the incident. A fresh panel was formed to conduct the second autopsy.

The second report also has given a similar conclusion that Gurvinder died of internal injuries and bleeding after being hit by the car, said his family, though The Hindu is yet to see a copy of the second autopsy.

The family said it has received the autopsy report. “It has nothing about the bullet. He has been cremated,” Mr. Raman Singh said.

District Magistrate Dinesh Chandra Singh said the family members of Gurvinder Singh had raised objections on the post-mortem examination done earlier. “With the permission of the state government, it was done again and videographed as well,” he added.

Locals claiming to be eyewitnesses in Tikonia claimed on Sunday they saw Mr. Ashish Mishra sitting in the SUV that mowed down the farmers and alleged that after his car lost balance he ran towards the sugarcane fields and while doing so fired at Gurvinder who had tried to catch him.

In the FIR lodged against Mr. Ashish Mishra in Lakhimpur Kheri in the wee hours on October 4 on the complaint of Hari Singh of Bahraich, it is mentioned that the Minister’s son ran towards the sugarcane fields after his car lost balance and that he was firing shots while trying to hide. Hari Singh, the complainant, accused Mr. Ashish Mishra of shooting dead Gurvinder.

The FIR was lodged under IPC 302, 304a and under criminal conspiracy among other charges. Mr. Ashish Mishra was sitting on the left front seat of his Thar jeep, the FIR alleged.

Mr. Ashish Mishra has, however, claimed that all allegations against him were false and that he was present in his ancestral village Banveerpur, a couple of kms away, to attend the annual wrestling event organised in the memory of his grandfather. “I have all videos and evidence,” he told a television channel claiming innocence.

Apart from the four farmers, a local scribe, two BJP workers and a driver were killed in the incident. Mr. Ajay Mishra had alleged they were lynched by the protesters.

The autopsy results of the others were not known. Their bodies have been cremated. The family of the scribe, Raman Kashyap, has said he was killed after being run over the car and they believe that the farmers did not lynch him even though an autopsy report is still awaited.