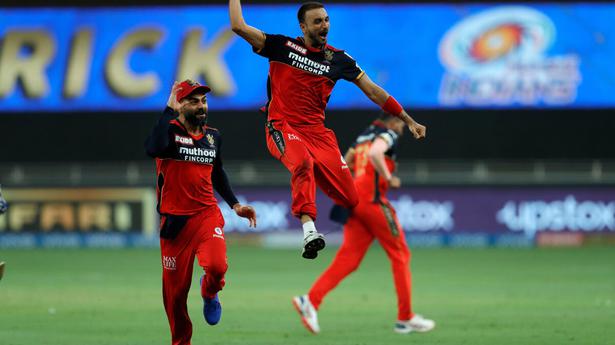 Harshal Patel scalped a hat-trick to power Royal Challengers Bangalore to a 54-run victory over Mumbai Indians in an IPL clash at Dubai on Sunday.

Pacer Harshal struck big in the 17th over of the chase, taking out Hardik Pandya, Kieron Pollard and Rahul Chahar. The dream over ended MI’s hopes of chasing the 166-run target.

Harshal started the over with MI needing 61 runs from 24 balls.

Hardik skied a slower ball to Virat Kohli at cover, while Pollard lost his stumps after walking too far across. The hat-trick was sealed with a third slower ball, which trapped Chahar on the pads.

Kohli took centrestage after fellow opener Devdutt Padikkal was dismissed for a duck by Jasprit Bumrah. One-drop K.S. Bharat (32, 24b, 2×4, 2×6) was not particularly fluent, save for a couple of clean slog-sweep sixes.

Kohli chugged along quietly, and recorded his second consecutive fifty. He received a life on 37, when Hardik put down a regulation catch at point. During the course of his essay, Kohli completed 10,000 runs in T20 cricket.

Maxwell came to the party with typical flair. He got going with a switch hit to left-arm spinner Krunal Pandya, which sailed well beyond the deep point fence. Milne met the same fate later, when Maxwell used a reverse scoop to hit a six over third-man.

Bumrah took the vital wickets of Maxwell and de Villiers in the 19th over, finishing as the most successful MI bowler with three for 36.