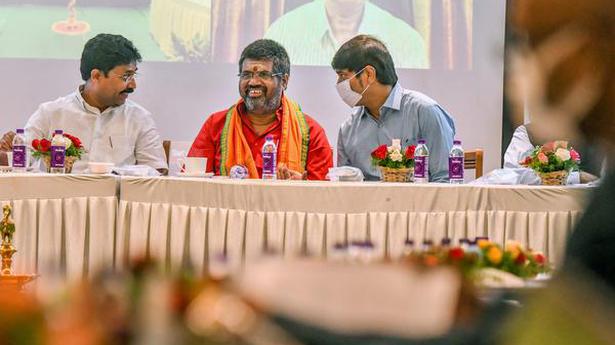 
The State government will take forward the imagination and ideology of legendary verse poet Gurram Jashuva, said Minister for Education A. Suresh.

Dr. Suresh, along with MLC Dokka Manikya Vara Prasad and MLA Tadikonda V. Sridevi, garlanded the statue of Jashuva at Guntur to mark the 126th birth anniversary of the poet.

“The contribution of Jashua to the Telugu language is incomparable. His stirring verse poetry mirrored the prejudices and untouchability prevalent in those times. Jashuva’s memory will be kept alive through the Jashuva Kala Praganam being constructed in Guntur . The introduction of English medium will go a long way towards empowering the weaker sections,” said Dr. Suresh.

The State government has been working towards the emancipation of people from weaker sections by implementing several welfare schemes. The Telugu Sanskrit academy is further propagating their ideals.

MLC Dokka Manikya Vara Prasad said that the Kala Praganam is being built at a cost of ₹3 crore and would be completed by the end of the year. The kala prangam would be equipped to host literary festivals, verse conclaves etc. He said that Jashuva was the first poet to use common man language in verse poetry.