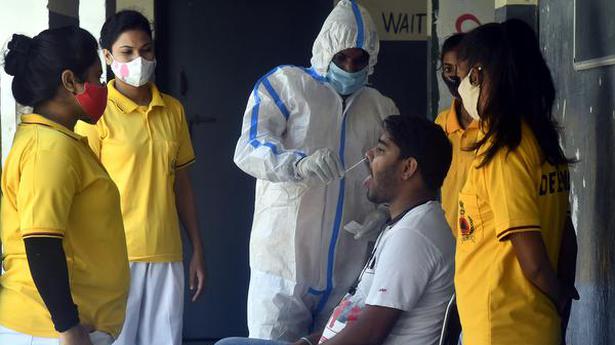 
Stressing that the COVID-19 virus may continue to transmit for a “very long time”, senior WHO official Poonam Khetrapal Singh said that the level of immunity in a community, through vaccination and previous infection, will determine whether it will become endemic in the long run.

Meanwhile, the cumulative COVID-19 vaccine doses administered in the country has crossed 87.6 crore on September 28, the Health Ministry said. The Ministry of Home Affairs (MHA) issued fresh guidelines on September 28 asking States for prompt and effective containment measures and to accelerate the pace of vaccination to prevent the rise in number of COVID-19 cases due to the coming festival season.

The guidelines issued under the Disaster Management Act, 2005 will be effective till October 31.

On the same lines, India’s drug regulator on September 28 allowed vaccine manufacturer Serum Institute to enroll children between seven and 11 years of age for its COVID-19 vaccine trial, taking the process of vaccination a step further.

You can track coronavirus cases, deaths and testing rates at the national and State levels here. A list of State Helpline numbers is available as well.

The Australian government is ramping up pressure on State governments to end pandemic lockdowns by outlining plans to end financial aid.

The government says in a September 29 statement that its payments to workers who lose hours due to lockdowns will end two weeks after a State or territory reaches its vaccination benchmark. That benchmark is 80% of residents ages 16 and older being fully inoculated with a double dose of AstraZeneca, Pfizer or Moderna.

A total of 25 people were hospitalised due to COVID-19 during the Tokyo 2020 Olympic Games, instead of the initially reported five, organisers said on September 28 evening.

“The initial five we reported was the figure for overseas residents who were hospitalised,” explained Tokyo 2020 CEO Toshiro Muto at a news conference. -Reuters

U.S. FDA leans toward nod for Moderna COVID booster shot at a half dose

A top Republican senator on September 28 welcomed India’s decision to resume the export of COVID-19 vaccines.

Senator Jim Risch, ranking member of the Senate Foreign Relations Committee, also urged India to increase the production of such vaccines so that it can meet its international obligations.

“I welcome the announcement by #India that it will restart exporting COVID19 vaccines,” Risch said in a tweet. -PTI

Italy’s health ministry said on September 28 it had given the go-ahead for travel to six non-European tourist spots without the need for quarantine as a COVID-19 precaution either on arrival or return.

Italians will be allowed to travel to the Maldives, Seychelles, Mauritius, Egypt (but only Sharm El Sheikh and Marsa Alam), Dominican Republic and Aruba on what the ministry called controlled tourist itineraries. -Reuters

Australia will wind down emergency financial payments aimed at helping people and businesses affected by the coronavirus pandemic as COVID-19 vaccinations rise, with payments in some states likely to end in weeks.

The federal government has spent over A$9 billion ($6.5 billion) since June to support around 2 million people, but will phase out the payments as vaccination levels near targetted levels at 70%-80%, Federal Treasurer Josh Frydenberg said on September 29. -Reuters

A Brazilian health care provider focused on elderly people has been targeted by a Senate investigation for allegedly obliging its doctors to prescribe drugs that aren’t effective in treating COVID-19.

Lawyer Bruna Morato, who represents 12 whistleblowing doctors currently or previously employed by the company Prevent Senior, told lawmakers on September 28 her clients were repeatedly told to choose between prescribing chloroquine to COVID-19 patients, along with other dubious substances, or else lose their jobs. -AP

300 jobs given to COVID victims’ next of kin

More than 300 persons who lost their breadwinners due to COVID-19 and those who lost jobs during the pandemic secured placements in a job mela organised for COVID-19 victims here on Tuesday.

5 districts continue to account for majority of COVID-19 cases

A total of 1,630 persons tested positive for COVID-19 in Tamil Nadu on Tuesday. Chennai, Coimbatore, Erode, Chengalpattu and Thanjavur districts continued to report more cases, accounting for nearly 42% of the total fresh cases.

Chennai led the table with 184 cases, followed by Coimbatore with 183 cases. There were 121 cases in Erode and 117 in Chengalpattu. Thanjavur logged 90 cases, while there were 86 cases in Tiruppur and 70 in Tiruvallur. Among the other districts, Salem recorded 65 cases, Tiruchi had 59 cases, Namakkal had 54 cases and Tiruvarur had 52 cases. Five districts had fewer than 10 cases each.

The Uttar Pradesh government has relaxed the COVID-19 lockdown norms by allowing more people to gather at open spaces outside containment zones for marriages and other functions.

However, for closed places, the earlier provision of allowing a maximum of 100 persons to be gathered at a time with proper Covid protocols in place remains intact. In a letter, dated September 27, addressed to police and administration officials in the state, Additional Chief Secretary (Home) Awanish Awasthi said, “A maximum of 100 persons will be allowed to gather at closed places at a time while following the COVID-19 protocol. A COVID-19 helpdesk has to be set up at the entrance point of the event.”  -PTI

Gujarat Health Minister Rishikesh Patel on September 28 told the State Assembly here that committees will be formed at the district level to pay compensation of Rs 50,000 to the next of kin of those who died due to COVID-19. -PTI

The Delhi government has so far received over 11,000 applications for one-time ex gratia under a scheme to provide relief to families who have lost a member to COVID-19, according to an official statement issued on September 28.

As of September 28, the Delhi government received 11,219 applications for one-time ex gratia of Rs. 50,000 under the Mukhyamantri COVID-19 Parivar Arthik Sahayata Yojana, the statement said.

A total of 5,323 cases have received the one-time ex gratia, while sanction has been issued in another 1,431 cases, it added. -PTI

The State government has issued a fresh notification on payment of ex gratia amount to the kin of people from BPL families who have died due to COVID-19.

As pre the notification issued on September 28, an ex gratia amount of ₹1 lakh would be paid to the kin of poor COVID-19 victims under the Sandhya Suraksha scheme. It also provides for payment of a compensation of ₹50,000 announced by the Centre to the kin of COVID-19 victims from the State Disaster Relief Fund.

Algeria will start production of COVID-19 vaccine Sinovac in partnership with China on September 29 with the aim of meeting domestic demand and exporting the surplus, the prime minister’s office said on September 28.

The government has said production capacity will stand at 1 million, 2 million and 3 million doses in October, November and December respectively, before reaching 5 million doses per month from January. -Reuters

White House says 400,000 people so far got boosters at pharmacies

At least 400,000 people have received booster shots of the Pfizer/BioNTech COVID-19 vaccine after U.S. health regulators cleared the shots on September 24 for people aged 65 and older, those with underlying medical conditions or in high-risk jobs, the White House said on September 28.

“Just over this past weekend at pharmacies alone, over 400,000 Americans received the additional protection of a booster and almost 1 million people have already scheduled their booster shots through pharmacies over the coming weeks,” White House COVID-19 response coordinator Jeff Zients told reporters at a news briefing. -Reuters

The Nagaland government on September 28 decided to extend its latest phase of unlocking till October 31 with more relaxations, officials said.

The State government has been announcing the unlocking process in a phased manner since July 1 and the current Unlock phase six was to end on September 30.

The decision was taken at a review meeting of the High Powered Committee (HPC) on COVID-19 helmed by Chief Minister Neiphiu Rio, government spokesperson and minister Neiba Kronu said. -PTI

Decision on nod to Ramlilas, reopening schools for junior classes expected in DDMA meet on September 29

The Delhi government is expected to take a call on permitting Ramlilas during the Dussehra festival and reopening of schools for junior classes in a meeting of the DDMA scheduled on September 29, official sources said.

Office bearers of some prominent Ramlila organising committees in the city met Lt Governor Anil Baijal on September 28 and urged him that the curb imposed because of the COVID-19 pandemic be lifted.

The Delhi Disaster Management Authority (DDMA) in its previous order had banned all kinds of religious, political, cultural and social gathering because of the pandemic. -PTI

No choice but to impose travel curbs to contain COVID-19: China

China said on September 28 that it has “no choice” but to take preventive measures like travel restrictions to contain COVID-19, as it reacted to a demonstration by stranded Indian students in front of its embassy in New Delhi.

Brazil’s Health Minister Marcelo Queiroga said on September 28 that the country will provide COVID-19 vaccine booster shots to all people over 60 years old.

Queiroga tweeted that the decision comes in line with the advance of the country’s vaccination program, adding that there are about 7 million Brazilians available to get the shot under these conditions. -Reuters

Psychology appointments in France will be funded by the government starting next year, the president announced September 28, amid growing awareness and concern about the importance of mental health.

Complete ban on bursting, sale of firecrackers up to January 1 in Delhi

The Delhi Pollution Control Committee on September 28 ordered a complete ban on the sale and bursting of firecrackers in the national capital till January 1, 2022.

According to the order, several experts have indicated a possibility of another surge of COVID-19 and largescale celebrations by bursting of firecrackers will result not only in agglomeration of people in violation of social distancing norms but also a high level of air pollution leading to serious health issues in Delhi. -PTI

The government on September 28 again extended the existing foreign trade policy (FTP) for another six months till March 31 next year, according to a notification.

French drugmaker Sanofi said September 28 it was shelving plans for a COVID-19 vaccine based on messenger RNA despite positive results from early stage testing.

The Paris-based company said it will continue to develop another vaccine candidate that is already undergoing late stage human trials. That vaccine, developed jointly with Britain’s GlaxoSmithKline, is based on the characteristic spike protein of the virus that causes COVID-19. -AP

All educational institutions in Assam will reopen in a phased manner from next month with physical classes in colleges, universities and technical institutions as well as for class 9 students to resume from October 1.

Offline classes for students of classes 1 to 8 will begin from October 19, an education department notification said on September 28.

Physical classes for final year students of higher secondary, degree and post-graduation courses as well as technical courses have resumed from September 6, while those of class 10 commenced from September 20. -PTI

The Supreme Court on September 28 said that there is no need for a toll-free number for registration for COVID-19 vaccination as the Centre has already started walk-in vaccination, where people can go for jabs without prior enrolment.

A bench of Justices D.Y. Chandrachud, Vikram Nath, and B.V. Nagarathna said that prayers in PIL filed by one Bibhuti Bhushan Mishra have become infructuous. -PTI