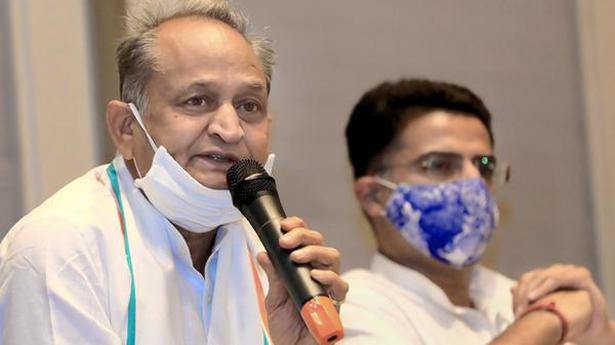 Amid speculation over an early Cabinet reshuffle in Rajasthan, Chief Minister Ashok Gehlot’s loyalists have affirmed that the political situation would not witness any major upheaval because of “unstinted support” of over 100 MLAs to the present leadership. The latest developments in Punjab are also likely to make an impact on Rajasthan.

While the rival camps in the ruling Congress have been trying to get a share in the political appointments, former Pradesh Congress president Sachin Pilot’s meetings with party leader Rahul Gandhi in New Delhi last week have visibly led to disquiet in the Gehlot camp. Mr. Pilot’s meeting with Speaker C.P. Joshi has also caught the attention of political observers.

The party high command’s focus on settling the feud may get diluted after Tuesday’s developments in Punjab, where party unit chief Navjot Singh Sidhu has resigned. Both the Gehlot and Pilot camps are aware of the Congress government’s thin majority in Rajasthan, which has prevented them from entering into a direct clash.

Senior Congress leader and Revenue Minister Harish Chaudhary, who was the party’s central observer during the recent change of guard in Punjab, said here the situation in Rajasthan and Punjab was “very different”, as the majority of the ruling party’s MLAs were with Mr. Gehlot.

Mr. Chaudhary, considered close to the Chief Minister, told reporters that the MLAs in Punjab had deserted Captain Amarinder Singh, while more than 100 MLAs were supporting Mr. Gehlot. Asked about Mr. Pilot’s meetings in New Delhi, Mr. Chaudhary said he was a member of the Congress family and was free to meet the party leadership.

The Pilot camp has also demanded appointments to various boards, corporations and other political positions. The leadership is reportedly mulling over the options of making Mr. Pilot the Pradesh Congress president again and subsequently giving him a role in the government. He could also be appointed general secretary in the All India Congress Committee.

The party has officially maintained that the Cabinet reshuffle, to be accompanied by expansion, has been delayed because of the ill-health of 70-year-old Gehlot, who underwent an angioplasty last month. AICC general secretary Ajay Maken, who had one-on-one consultations with all the Congress MLAs, said the roadmap for Cabinet expansion and organisational rejig was ready.

Sikar-based political analyst Ashfaq Kayamkhani said the high command would find it difficult to put pressure on Mr. Gehlot to act in a certain way after the new developments in Punjab. “Mr. Gehlot has had a track record waiting for the right time to appoint the people of his choice to important positions. He cannot be compelled to act against his wish,” he said.

The State can have a maximum of 30 Ministers but there are only 21 members including the Chief Minister. In the event of a Cabinet reshuffle, all the Ministers may be asked to tender their resignation and the Cabinet may be formed anew.