HomeentertainmentAnusha Dandekar on fashion, reality TV, and why MTV will always be her ‘safe space’
entertainment

Anusha Dandekar on fashion, reality TV, and why MTV will always be her ‘safe space’ 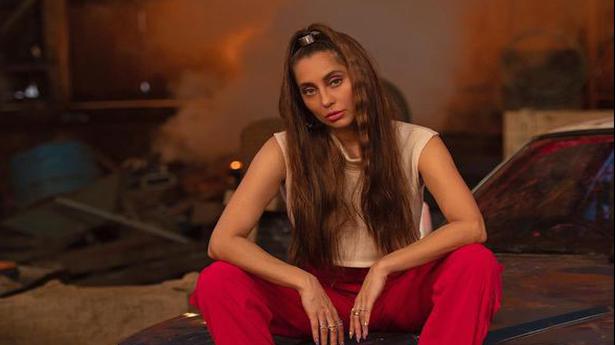 The VJ-actor-singer talks about the second season of ‘Supermodel of the Year,’ working with contestants from different walks of life, and more

Anusha Dandekar is a name synonymous with fashion, music and MTV in India; such has been the VJ, singer and actor’s influence on television over the better part of the last two decades.. and counting. The Indian-Australian’s contribution towards shaping the pop-culture zeitgeist in the country right from the early 2000s cannot be underestimated, and numerous hit shows stand testimony to her influence.

Her latest project is the second season of MTV Supermodel of the Year, where she is a judge alongside Malaika Arora and Milind Soman. After a successful first season, this sophomore effort, with #UnapologeticallyYou as the theme, is meant to be a statement for aspiring fashionistas to embrace their individuality and be themselves.

Talking to us over a video call, Anusha finds time to have a quick conversation on what MTV is hoping to achieve with the show, the pressures of being a reality show judge today, and if the pandemic has influenced her (and our) fashion sensibilities.

Excerpts from an interview:

This season, you have models from different backgrounds; from a cop and hockey player, to a boxer and transgender person. How do you go about choosing who gets to compete on the show?

Picking women from different walks of life; that’s not something we ever consciously decide. What is consciously decided is that we will take in all women, from any background, who want to be a supermodel and are committed to pursuing this as a career. That’s what our motivation always has been, and everything else just is an added inspirational bonus really.

When we are accepting entries, there definitely has to be some level of experience they are coming with, which we can fine-tune and pull out in the long run. We are looking for that supermodel, who may not have all the training and so on, but we try to spot the passion that we’re going to be able to work with.

This show’s theme is about breaking stereotypes, and how one should lead a life of one’s choice. However, these are recent developments in the fashion industry. How does someone like you, with nearly two decades of experience in the industry, go about the responsibility of changing preconceived notions?

When I got into the industry, maybe it was because MTV never asked me to be any different to what I was, but I was always in a bubble… I don’t know. But I was always kind of looking for a way to — in MTV shows — include everybody, because I don’t believe that our country was racist or, that we couldn’t embrace diversity. I kept wondering, why do we have these unattainable beauty standards? And then obviously, social media adds to all the stress of it.

But I think now — maybe the pandemic has helped — it’s beautiful to see that there is a shift. MTV Supermodel is one of those shifts, because we’ve always had diversity and included everybody. MTV was the first channel to have a show based on love, where we included everybody in the love category, irrespective of them being straight or part of the LGBTQIA+ community.

MTV has always been a safe place for me, and that’s why I think I have stayed here for so long. Yes, it definitely has been an uphill battle for a nation or the world as a whole, to break these stereotypes, but I also think somewhere MTV was always the pioneer of… “we don’t see the standards, we’ll make our own,” you know?

Over the last few years, we have seen fashion have a major presence on social media, with Instagram influencers and so on, especially during the pandemic. How much of that has influenced fashion on-stage or conventional ideas about style?

Well, they are two very different things for sure. You’re either an influencer on social media, or you’re somebody that’s an expert in your field, right? But I don’t discriminate either. When you’re an influencer, you’re talking to an audience that really resonates with you. Maybe you’re an amateur in certain things, but the people that are watching you are relating to that, because they don’t know a lot either, and you’re kind of learning on the way and having a good time as well.

Then the expert is there, when you really want to be trained and learn properly. So I think, if you open your mind to it, you get the best of both worlds and educate yourself on so many things.

When you’re a judge on a high-profile show like this and interacting with these young women on stage, how much pressure is there on you? Considering these are contestants with less fashion expertise, you may have to be critical at times, but not cross the line. Does that weigh on your mind?

If I’m looking at you, as somebody who’s different from the rest, then how are you feeling included? So whether you are trans, a police officer, a sports person, or just that girl who broke barriers to get here because her family wouldn’t allow it, we will treat you the same.

Obviously, the bravery behind each and every one of them is so commendable and inspirational, and I love it. But when someone is on the platform and wanting to be a supermodel, I’m just looking at your technique and how you are on stage. I remember even off-camera, the transgender contestant telling us she was so thankful to be on the show; I told her she’s here because of her potential and talent, not because we are trying to diversify in any way.

So if the trolls do come out, please let them, because I will say this: it is you are making them feel different.

Finally, how do you think the events of the last two years have affected everyone’s fashion sensibilities?

Honestly, putting on heels again has been the biggest issue for me. I think I’ve been barefoot now for two years! (laughs) But you know, it’s like muscle memory. After that first dress is on and you can’t breathe for a while, the body adapts and you’re like, oh, this feels cute after all.

Seriously though, did feel kind of weird, but nice, to be a little different and dress up again. In terms of the fashion game, I think all of us are making that little extra effort because it’s been such a long time.

The Hindu Business Line7 mins ago
2