WhatsApp Hopes to be the Pivot That Digitises Small Businesses, Says India Head 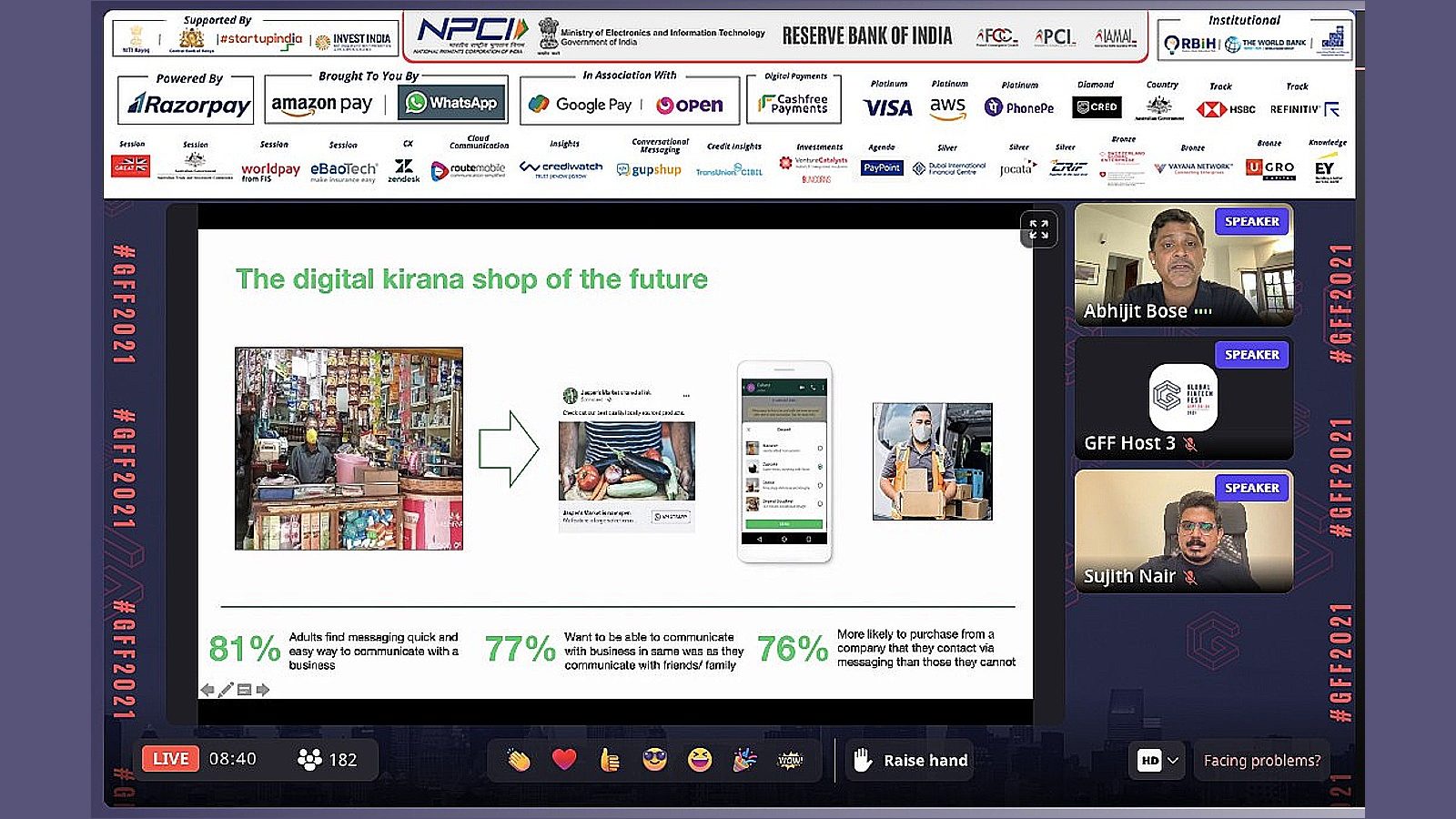 
As digital payment instruments evolve in adoption among mass users and businesses in various cities, tools such as the WhatsApp API aim to become integral to bringing small businesses online – particularly from unorganised sectors. Addressing the audience on the first day of the Global FinTech Festival, 2021, Abhijit Bose, country head for WhatsApp in India spoke along with Sujith Nair, CEO and co-founder of the Beckn Foundation, to underline how alongside payment instruments, tools such as the WhatsApp API will be key to helping micro enterprises and small, individual business owners pivot to online platforms.

The transition, as both Bose and Nair highlighted, will have to be simplified to maximise adoption – while offering value in terms of direct business conversion, to be adopted successfully. “We are right now at a stage where a small-volume businessman from an unorganised sector may still be largely shy of technology. The maximum exposure to technology platforms for such a person is likely apps such as WhatsApp, that too as a personal consumer. For such users, offering them a complicated process of multiple vendors, different parties and platforms to jump through will simply put them away from digitising their businesses, and such actions may stall the growth of bringing businesses online,” Nair said, while talking about the objective that his Beckn Foundation works with.

“This will hold true especially for unorganised sectors, which constitutes a massive bulk of Indian businesses,” Nair added. In tandem with his assessment, Bose underlined how services such as the WhatsApp API have grown “significantly” in recent times to help enterprises realise this ease of operation. While he did not reveal numbers in particular, Bose claimed that both business onboarding as well as user adoption have been increasing steadily across businesses of all sizes. Talking about “custom digitisation” for small businesses, Bose stated that the WhatsApp API can help these ventures implement resources from the unified India Stack, to come online.

As for its market demand, Bose claimed through WhatsApp data that 81 percent of adult users actually prefer messaging a business when transacting online, and 76 percent individuals are more likely to make a purchase, if they succeed in connecting with a business via messages. To therefore enable businesses to connect with users, Bose claims that among other things, the WhatsApp API will help reduce operational complications such as adopting technical processes for a transitioning business. “Our platform can therefore help change the typical cost structures, hence democratising access to technology for everyone in our country,” Bose added.

Bose cited examples such as the CovidAsha chatbot, which was built on the WhatsApp API by solo entrepreneur Alysha Lobo, in tandem with some of the biggest technology platforms such as Google, HP, VMWare and others offering support. This chatbot, for instance, to offer accurate information regarding hospital availabilities and oxygen supplies during the devastating second wave of the Covid-19 pandemic in India. As an example of the WhatsApp API’s flexibility, Bose cited how such a platform is now live in seven Indian languages, while others such as the MyGov WhatsApp chatbot have proved capable of handling thousands of queries every day.

All of this culminates in Bose’s optimism, which he says has so far reflected in increasing adoption of WhatsApp banking services – especially in underserved markets. He also touched upon how small F&B and retail segment vendors, who could not afford to have their own, dedicated apps, can now leverage WhatsApp as an amalgamation of an app and a communication service – offered together with a platform that already has millions using it. Small businesses and their founders, for instance, are taking orders via direct messages – and with features such as Pay, WhatsApp may seek to become a one-stop app.

Going forward, what will be interesting to see is if the infamous fiasco around the WhatsApp privacy policy would affect its adoption in the long run. While the Facebook group attempted to mitigate the perception damage by citing end to end encryption, WhatsApp’s plans to monetise via business adoption, along with its collection of metadata to ‘support’ businesses may remain a thorn on its side. Whether this hurts its eventual business potential will only become apparent once its adoption picks up further pace in the years to come.