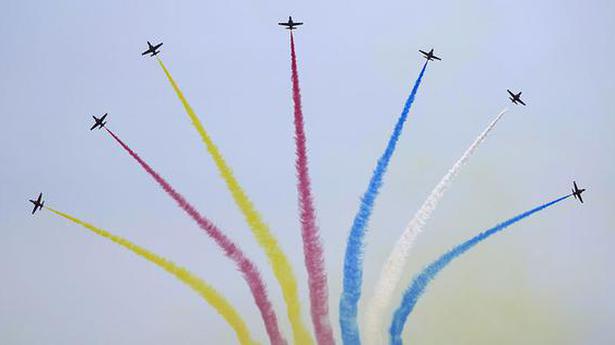 
China on Tuesday showed off its increasingly sophisticated air power including surveillance drones, with an eye on disputed territories from Taiwan to the South China Sea and its rivalry with the United States.

The country’s biggest airshow, in the southern coastal city of Zhuhai, comes as Beijing pushes to meet a 2035 deadline to retool its military for modern warfare.

China still lags behind the United States in terms of tech and investment in its war machine, but experts say it is narrowing the gap.

On Tuesday, the air force aerobatic team left colourful vapour trails as it manoeuvred in formation, while visitors inspected new jets, drones and attack helicopters on the tarmac. The CH-6, a prototype drone with a wingspan of 20.5 metres, was among the domestic tech unveiled. It is designed for surveillance and can also carry weapons for strike missions, according to open-source intelligence agency Janes.

Other debutants included the WZ-7 high-altitude drone for border reconnaissance and maritime patrol as well as the J-16D fighter that has the ability to jam electronic equipment.

The Zhuhai airshow, usually held every two years, was postponed from last year due to the COVID-19 pandemic and is being staged before a largely domestic audience due to travel restrictions.