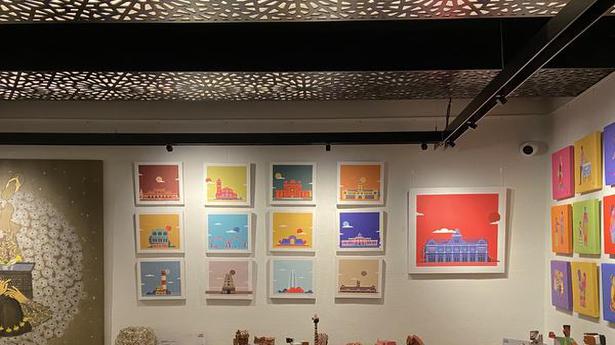 Despite the pandemic, Vennba has launched. With a focus on affordability, the curated art studio hopes to bridge the gap between the buyer and artist

Sharing its name with a form of classical Tamil poetry that merges metric rules with context-free verse, a humble space, with wooden floors and a sleek design is the newest entrant in Chennai’s visual arts culture.

Set in T Nagar’s GN Chetty Road, the space — christened Vennba — dons the garb of one that is exquisitely Madras. The walls currently sport work by young, promising city artists, Varshini Ramakrishnan and Sunil Raghavendher, both of whose muse happens to be the 381-year-old city and its people.

In a bold move amid the pandemic, when art galleries are scurrying to occupy the digital space, Vennba opened its physical space in the last week of August aiming to encourage people to stay in touch with the gallery-viewing experience, all safety precautions in place.

The curated art studio created by design firm, Pencil and Monk, hopes to bridge the gap between the buyer and artist. Designer and former movie director and publicist Siddharth Chandrasekhar, is the brains behind the space.

“A lot of art is becoming part of interior design, now. For smaller homes, it is becoming a challenge to develop art that is affordable and aesthetic,” says Siddharth, adding that our aesthetic has narrowed down to objects and pieces brought from outside the country. “These objects just fill the space, they aren’t timeless,” he points out.

This is where Vennba wishes to come in: to direct attention to locally-made works that are affordable and can be passed down generations. And, in the process, Siddharth hopes to put the spotlight on local, up and coming artists. “I am trying my best to get artists who have never been featured, or have had an opportunity to show,” he adds. The series that are currently on display fall around the price of ₹3,000.

The fact that the space opened with an exhibition titled Madras Nalla Madras, featuring young, city artists is the testament to the same. Varshini’s Madras Makkal series is an exploration of the people who make Madras, through pop art-inspired prints, patterns and colours that are specific to the city.

Sunil’s Madrasa Suthipaka Porein and Madras Jannal series give glimpses into the city’s heritage and cultural icons: from its windows, replete with an architectural style specific to a particular area (identified by pincodes) to oft-seen landmarks like Marina beach.

“We made it limited edition. They are also Chennai memories that can be taken home or gifted,” Siddharth adds. Apart from the art works, collectibles and branded decor products are also on display.

The neutral space with a warm colour tone has been designed in such a way that the works stand out. “We deliberately kept it dark, so that the paints speak out. Once the pandemic settles, we are also planning to have lecture demonstrations and collaborative sessions with artists and collectors.”

Though the space is not getting many walk-ins, Siddharth is not flustered. “I want people to slowly start coming in. We have arranged one-hour slots, during which we allow five to six people,” he explains.

Mahesh Bhatt files defamation case against Luveina Lodh, Priyanka Chopra’s mom was worried about this as she became Miss World

An ink that cured a creative block

7 Students Killed, Scores Injured In Blast At Madrassa In Peshawar