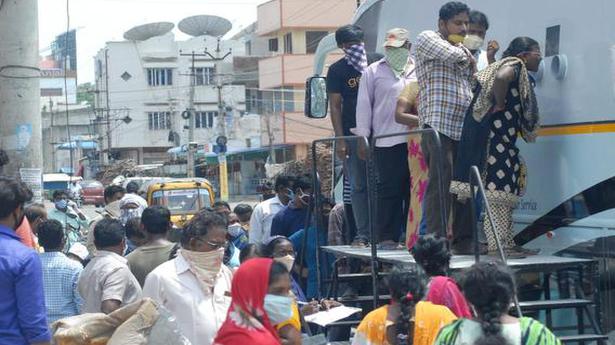 
Twelve more people — seven in Prakasam district and five in Nellore district — succumbed to coronavirus while 707 persons tested positive for the pandemic in the last 24 hours.

With this, the death toll rose to 129 in Prakasam district and 105 in Nellore district,, a health bulletin released by the State Government said on Tuesday night. The pandemic curve showed no signs of flattening in the two districts, officials said, as the total number of positive cases rose to 14,614 in Nellore district and 9,328 in Prakasam district.

On the bright side, 969 patients — 707 in Nellore district and 262 in Prakasam — were cured and discharged from hospitals which were filled to capacity. With this, the number of active cases came down to 6,838 in Nellore and 3,396 in Prakasam district.

The Prakasam district administration announced a stringent lockdown in Ongole for two weeks from Wednesday in the wake of a steep increase in COVID-19 deaths and fresh cases, Collector P. Bhaskar said.

A ‘stay-at-home’ order would be strictly implemented from Wednesday as the disease spread across the city, he said, adding that people would be allowed to step out of their homes only for three hours till 9 a.m. to purchase essential commodities. Mysore Projects, Prestige to build mixed use project in Chennai

Times of india41 mins ago